Cover Me by Kacey Hammell (@kaceyhammell) 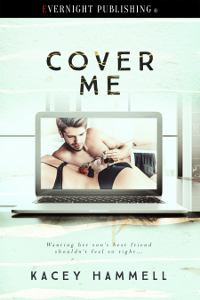 Jay Savage is one of the most sought after models in the business who seems to have it all. He’s the face of romance novel covers from coast to coast, and has expanded his brand to an executive role. Despite the endless possibilities in his life, Jay doesn’t have the one woman he wants most. She is everything he needs, and everything he can’t have. Their age difference isn’t the only obstacle standing in the way of convincing her they were made for one another. Leanne is also his best friend’s mom.

On Nita Lake to celebrate the marriage of her son, Leanne Hogan is faced with the most delicious temptation she’s ever encountered. Their smoldering heat burns down her defenses, and Leanne finds herself giving in to the only man who tempts her banked desires. They shouldn’t work. Can’t work. So why does it feel so right when she’s in his arms?

Leanne swallowed a mouthful of water, then smiled at him. “Perhaps you’ll find Mrs. Right and live happily ever after. And get out of that bachelor studio apartment.” She grinned.

Jay’s gaze cut to her, staring her down. A jolt of excitement slithered along her spine. His eyes nearly black, a deep abyss stared at her. Her heart raced. He never gazed at her with such intensity.

“What makes you think I haven’t found her yet?” he questioned, his tone grave and almost harsh.

“Oh, well … uh, I’m sorry. I didn’t know you had. Why didn’t you bring her to the wedding? Does Beau know her?” Leanne didn’t know what was worse: the thought of him with a woman, or the power in his eyes as he stared at her. “I’m happy for you.” It was a little fib. She frowned, not sure she liked the thoughts running through her head. This was Jay, for heaven’s sake. Her attraction to him wasn’t smart, nor did she have any say in who he dated.

Suddenly, Jay latched onto the front lapels of her robe and dragged her across the mere space separating them. Shocked, her eyes widened even further when he hauled her in against his thigh, holding her tight against his chest with a strong hand at her back. “There’s only one woman for me,” he murmured, and lowered his head.

He wasn’t going to…

His mouth plundered hers, his tongue driving deep. He tasted like melted chocolate drizzled on top of chocolate ice cream. But there were hints of stale coffee and mint underlying the sweetness.

What was happening? What chaos had shifted her world on its axis? Was she really being devoured by Jay Savage, model and sex god? Could he be as savage as his last name?

He lifted his hand to her jaw, keeping her in place as he slid his lips along hers. Slow, easy, wet, and hungry. Nothing was ever this good.

The thudding in her chest almost hurt with its ferocity.

How would she survive if he ever stopped kissing her?

Jay groaned low as he tasted her. The sound vibrated in her own ears. Leanne drew in a deep breath as he skimmed his fingers along her chest to the top of her towel while holding the back of her head with his other hand.

Air barely moved through her lungs his hold on her was tight, pressing her snug against his side. She held fast to his left bicep, hoping he’d keep her from being spun away in the craziness of the moment.

Never in her wildest dreams did she think she’d be here, up against him like this, breathing him in and enjoying his mouth on hers. If someone had told her she’d be here today, her body aflame and being the feast at this man’s dinner, she would have called them bat-shit-crazy. But damn. Her body was on fire. Chemistry and vigor she hadn’t known in over a year— longer if she admitted to herself that things had been dead for years in the bedroom with her ex—had come to life. She wanted to pounce on the man beside her.

Jay lifted his head. His molten eyes stared down at her, wanting her. The need there called to her, surrounded her. Her pulse raced and her lungs burned from breathing so hard.

Her eyes widened. What the hell was she doing?

She was going to hell for sure. In a lip-lock with a guy twenty years younger than her! She ought to be ashamed.

Speak for yourself. I’m enjoying myself.

Leanne wanted to scream at her conscience. This was wrong. Super wrong. He was her son’s best friend.

She stood, her fists clutching her robe tight around her. “Um, I’m sorry, this should never have happened.” She stomped toward the door, wishing the universe would suck her up and keep her until sanity returned.

“Wait, Leanne.” Jay grabbed at her arm, but she yanked it away.

“No. I can’t talk.” She sounded like a frickin’ lunatic, but the air in the sauna was too stifling. She needed out. Now. “I have to go. I can’t be here.”

Leanne threw open the door and raced down the hall toward the change room. She pulled the key from her pocket, opened the locker, scooped up her belongings, and exited the room. She dashed into the back hallway toward the elevator on the north side.

Leaning her head back against the wall, tears filled her eyes and she let out a guttural moan.

A fool. That’s what she was. A damn fool. To be swept away by his kiss, knowing he’d done nothing but be kind and pitied her for being alone all weekend, and believing a young guy in his prime could want an old, washed-up divorcee like her.

Embarrassment and frustration filled her. Her luck with the opposite sex was nil and zilch. She was better off alone.

The elevator dinged, and Leanne exited and scurried to her room. She entered her room, threw her belongings on the bed, and sat on the end of it. Tears rolled down her cheeks. She didn’t know what would haunt her more: the shame of giving in and enjoying the moments while kissing Jay—

Or the gullibility to think he wanted her as much as she did him.

Readers can find all my titles under the “Bookshelf” menu on my website – www.kaceyhammell.com

Please consider following me at: 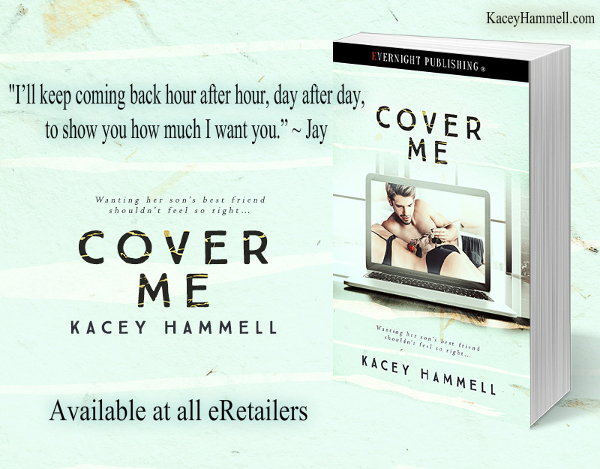 One Response to "Cover Me by Kacey Hammell (@kaceyhammell)"