New Release: Taking Over Me by Sara Brookes

Yippee—it’s release time for Taking Over Me, the first book of my Geek Kink series! To help me celebrate, some fantastic friends of mine are gracious enough to give me a hand ((A list of them can be found over on my site here: http://www.sarabrookes.net/2013/03/20/new-release-taking-over-me-a-special-contest) So here’s the blurb and a little snippet (there are four different snippets around the blitz). Be sure to stick around, there’s a giveaway at the end. 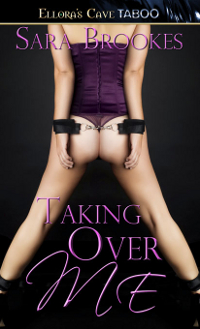 He’s everything she didn’t know she needed…

Allison would rather fix computers than worry about sex. That is, until the newest barista in town changes everything. All it takes is one hot stare with his sinful baby blues to remind her she’s not just one of the guys. She has lusty needs only he can fulfill.

Patrick’s coffee shop is on the verge of an epic failure, until Allison takes charge of his computer system. He may not know anything about motherboards, but he does know how to take control—in and out of bed. Now Patrick is determined to get what he wants—Allison in his cuffs. His sensual mastery awakens an intense passion and under his command, he’ll unlock the geek girl’s darkest desires.

You may never look at your local barista the same way again.

Patrick watched, enthralled, as Allison set the bag down on a high table and slid a stack of thin glossy comic books out of the bag. Each issue was handled delicately, as if it was a precious object that needed to be held with care. He didn’t see anything in the hoard of books he recognized, but since he hadn’t seen or touched a comic book since childhood, he didn’t find that especially surprising.

He wanted to ask her about her attraction to each when his gaze fell on her face. The words caught in his throat as he became struck speechless by the sheer joy in her expression. Her chocolate-colored eyes were bright and a touch of pink darkened her cheeks.

She’d looked the very same way last night when he’d brought her screaming over the edge. He watched in fascination as she carefully scanned each book while she held it with her fingertips. This was so much more than a hobby for her. This was a very serious and unshakable passion.

Arousal pooled in his groin as he watched. When the sensation flourished without any encouragement, he realized he couldn’t wait until later. He had to have her now. Where they stood positioned them perfectly so they were hidden if someone glanced into the room. Coming fully into the room was a different matter, but that had never stopped Patrick before.

Sliding closer, he slipped his hand along her back. She squirmed, giggling softly when his fingers dipped below the hem of her skirt. In one quick motion, he lifted her skirt over her hips. Her gasp filled the small space, arrowing straight to his cock. She moved to stand, but he slid closer, dipping two fingers inside her pussy. Her elbow hit against the table, causing her to cry out in pain.

“I’m fine, Tony. Just being a klutz.” A moan rumbled in her throat as Patrick drove his fingers into her harder, leaning close.

Sara Brookes is an award-winning author has always been fascinated by the strange, the unusual, the twisted and the lost (tortured heroes are her personal favorite). She is an action movie junkie, addicted to coffee and has been known to stay up until the wee hours of the morning playing RPG video games. Despite all this, she is a romantic at heart and is always a sucker for an excellent love story. Born and bred in Virginia, Sara still lives there with her husband and daughter. The entire family is owned by two cats, Galahad and Loki, who graciously allow the family to cater to their every desire.

Sara can be found:

One winner will be chosen from the Rafflecopter entries for a special Swag Pack (with a limited-edition coffee mug for the coffee shop featured in Taking Over Me). Entries will be accepted from midnight 3/20 and run through midnight 3/27 (all times EST). If you’re unfamiliar with Rafflecopter, it’s an easy way to earn extra entries to the contest! But remember, it’s only mandatory to comment.

3 Responses to "New Release: Taking Over Me by Sara Brookes"