Inspired by a salacious catalogue found in her deceased uncle’s library, she applies for an apprenticeship with the Toymakers Guild. The Guild fabricates bespoke sexual artifacts for the private pleasure of select clients – an occupation for which Gillian, with her technical abilities and her lascivious temperament, is eminently suited.

When an unscrupulous nobleman sets up a competing enterprise, he threatens not only the livelihood of the Guild’s members but their lives as well. Gillian hatches an audacious plan to entrap the villain, save the Guild, and leave the absent Master no choice but to grant her heart’s desire.

If you like steam punk erotica with a kinky feminist bent, you’ll love The Pornographer’s Apprentice. 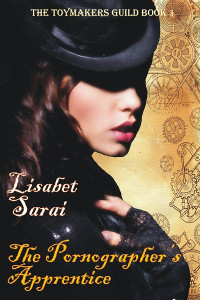 Red welts now streaked the journeyman’s back. Amelia surveyed her handiwork, apparently taking a break. “That’s half of what you’re owed,” she told him. “However, the next dozen strokes won’t be so easy.” She rummaged in her box. “I’m sure you’ll remember this. One of your cleverest designs.”

She held up a bulbous device, tapered at both ends, about two inches in diameter at its largest. A quartet of wires flowed from the base, terminating in broad rubber cuffs.

Sébastien groaned. “Mr. Bosley’s electric arse stimulator? But we delivered that more than six months ago!”

“I had Mr. Fawcett and Mr. Burns build a duplicate. Just in case. Fortunately for you, I have plenty of lard…” Suiting actions to words, she scooped some waxy white substance out of a covered jar and smeared it over the device. Spreading Sébastien’s rear cheeks with one hand,  she pressed the greased plug against his sphincter with the other. “Just relax,” she crooned.

She reached around to grab his erection, using it for leverage. He shuddered at her touch. “Don’t fight me, boy. You know you won’t win.”

Pushing and twisting simultaneously, she finally seated the bulb in his rear channel.

Gillian moaned in concert with the victim, her recently reamed arsehole twitching.

“Such a brilliant concept,” she continued in a even tone as she fastened the cuffs around his thighs and upper arms. “Harvesting the power of the user’s own kinetic energy, I mean. The more frenetic the struggles, the more intense the electrical stimulation.”

Amelia smoothed the curls away from his forehead, then dropped her hand to his rampant cock and squeezed. His jerk of pleasure turned to a cry of pain as the devilish toy delivered a shock to his tender rectum. “Are you ready for the second dozen strokes, my boy?”

The lash snapped, landing on his shoulder. Reflexively, he flinched away from the blow. The sudden movement activated the electric plug. He let out a wail, his back arching as the infernal thing in his arse came to life.

The next stroke carved a red path across his buttocks. This time he managed to keep himself still enough to avoid being shocked.

“Two,” called his tormenter. Before he could catch his breath, the whip flew once more, slashing across the backs of his thighs.

“Three. Are you all right, Sébastien?”

“I’ll say ‘Logarithm’,” he replied. “But you need not worry. Finish the punishment, Mistress. I deserve it.” 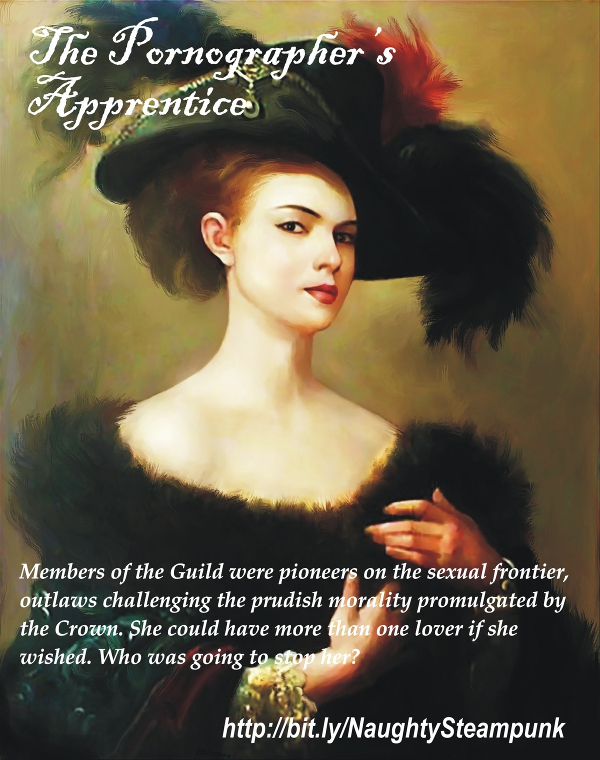 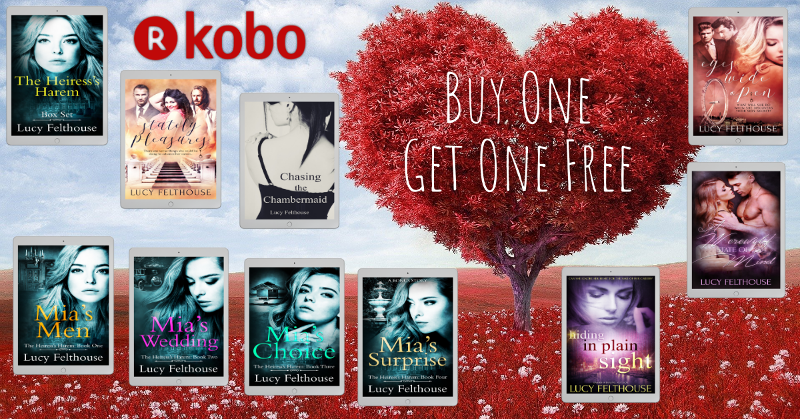 It’s my birthday, but you’re the ones getting the presents…

I’m delighted to announce that the fabulous folks at Kobo included a bunch of my titles in their August-long deal of Buy One Get One Free on selected romance titles. The deal is available in Canada, the United States, the UK, Australia and New Zealand. Add titles to your basket and the cheapest one will be free.

The titles I have available in this promotion are:

So, if you’re a Kobo shopper and love a bargain, now’s the time to hop on over there and stock up your eReader! 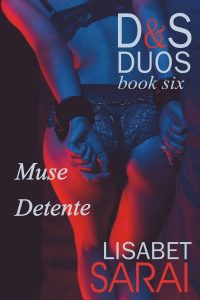 Of course she’d dreamed of being a slave. That was obvious on a close reading of any of her romances. The passion leaked out, even in the tamest of her kinky scenes. Yet when the Master she’d craved appeared, at first she didn’t recognize him.

I don’t want to surrender, but I can’t help it. I’m dizzy with instantly kindled lust. He nips at my lips, probes me with his tongue. He drinks me in, consumes me. Between my thighs everything melts. The room begins to smell funky, as though he already had me naked and open before him.

The room had been silent for so long, her own voice startled her. He looked up from his book.

“Done? Let me see.” Seating himself out of reach once again, he perused the three and a half-pages she’d composed.

Anxiety mingled with lust, she watched his reactions. He arched an eyebrow – pursed his lips – shook his head. Did he like it? Was it raw enough to earn her the reward she craved?

Finally he set the pad down. His lips curved into a grin. “You certainly are a nasty girl, Lissa. Just as I suspected.”

Unzipping his coveralls, he draped them over the chair back. He was naked underneath, sporting a sizable erection that made it quite clear what he thought of her work. Elation sang through her.

Still shackled to the chair, she was awkward as she slipped to the floor.

“Hands clasped behind you. Back arched.” She presented her breasts, wondering what he thought of their modest size. They hadn’t really talked about bodies at all. At least her nipples were impressive, pert, fat nubs the size and shape of hazelnuts. He brushed the tips with his palm, sending tendrils of pleasure spiraling down to her clenching pussy.

“Very good. Now the other…”

Two clamps hurt far more than twice as much. She whimpered, determined to act like the slave he believed her to be, obedient and brave. He traced the outline of her lips with one finger, then slipped it inside her mouth. She sucked hard on the digit, imagining it was his cock.

“Soon. Very soon. You’re doing well, Lissa.” He removed his finger and this time she couldn’t stifle her moan. “On all fours now.”

Gravity pulled at her breasts, heightening the pain. Mitch unfastened the chain securing her to the chair then backed away. “Crawl to me,” he ordered. She did, knowing she looked ridiculous, not caring if this was what he wanted.

He’d thrown a pillow onto the carpet. With a hand between her shoulder blades, he pressed her head to the floor. “Stretch your arms back behind you.” She’d complied before he’d even finished the order. This was, after all, her fantasy. 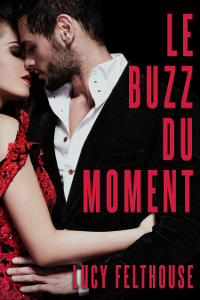 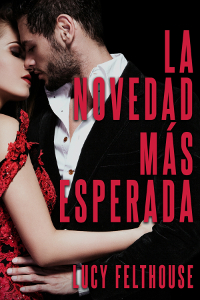 I hope you are all keeping safe and well in these horrible and worrying times. 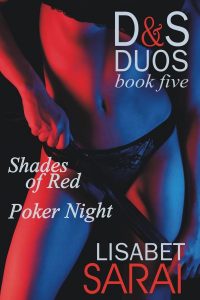 Powerful women take control in this fifth volume of Lisabet Sarai’s D&S Duos series. In “Shades of Red”, a young woman vacationing in Amsterdam rents a room in the fabled red light district and discovers the thrill of dominating a willing male. In “Poker Night”, a God-fearing, working class guy visits his Mistress to satisfy his secret, shameful needs. Also includes a sizzling F/m excerpt from The Heart of the Deal: Business, Bondage, Discipline and Desire.

She retrieved the cane from the wall. “This should do the trick.” The flexible rattan rod whistled through the air as she warmed up. The hair at the back of his neck stood on end at the sound. His balls tightened into aching knots.

“Open your thighs wider. And bend over so the fabric’s stretched tight across your butt. That’s good.”

Jack trembled, off-balance, waiting for the first stroke. Leaning forward, he found that the padded cuffs around his wrists supported most of his weight. Then again, he felt as though the lump of granite jutting from his crotch would be heavy enough to drag him to the floor.

He had been hard half an hour before he left the poker game, knowing that this would be his final destination. He hoped nobody had noticed his boner when he got up to leave. Early delivery at the store, he’d told them. Need to get my sleep.

All the last week he’d been harried by anxious dreams, but he’d sleep soundly tonight. He always did, after a session.

“Yes, Ma’am,” he murmured. Still the pain surprised, biting into his flesh as though his ass was totally bare.

“Ow!” he yelled. He had time for two deep breaths before she slashed at him again. His cock jerked against the cotton that bound it against his belly, threatening to explode. The cane left tracks of fire burning across his buttocks. The agony spread and mutated, merging with the awful pressure in his bladder.

Each searing stroke hurt more than the last. He was shaking, near tears, from the excruciating pain and the effort of staying in control. Yet, when she paused to get her breath, he craved another stroke. The pain was almost unbearable, but its loss was worse still.

Jack was silent, overwhelmed with shame. He didn’t want to admit it, his weakness, his sickness.

“Answer me, boy. Have you had enough of my cane? Or do you want more?”

The authority in her voice sent a delicious chill up his spine. Did it even matter what he wanted? He was in her power. Everything was up to her.

“No answer. I guess that means you’re done, that you can’t take anymore—”

“No…more…” The croaking voice seemed to belong to someone else.