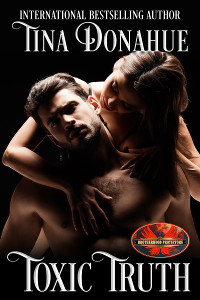 Only he stands between her and a hired killer.

When Kenzie discovered a toxic truth that harms military personnel, the international corporation where she worked put a hit on her. Desperate to survive, she escapes to the Crazy Mountains to hide out at a deserted cabin she recalls from childhood.

Lucas owns the property now. As a former Ranger and sniper, he’s never met a more terrified young woman. Yet despite her fear, she’s determined to bring her former employer to justice.

Not without his help.

There’s no turning back as they surrender to their mounting passion for each other and meet danger head on to bring a criminal enterprise to justice, saving those service members most at risk.

She couldn’t chance him knowing who she was if his buddies were looking for her. It didn’t seem likely, given his easy-going personality and what he’d already revealed about himself. However, risking anything at this point wasn’t wise. “Why is my name important?”

“Are you a movie star or some kind of internet sensation?” He worked his mouth to stop his smile. “Afraid I’ll recognize you from your name rather than how you look at this point?”

A drowned dog probably had her beat in the beauty department. Hardly caring, she rubbed the blanket over her lenses to dry them but left thick smears instead.

“This might work better.” He pulled a rag from his back pocket. “It’s clean.”

After taking it, she worked on her glasses, uncertain whether to feel bad for treating him like a criminal or to maintain her caution as to what he might do next. Vigilance won out. “Anything else you can tell me about yourself?” She pushed the rag in her jacket pocket. “Like why you’re up here alone— You are alone, right?”

He scratched his stubbled cheek. “If you’re asking if I have a wife and kids, it’s a firm no on both counts. There’s no long-term girlfriend in my cabin either. How about you? You running from an ex-husband, ex-lover, or a current one in those two categories?”

“Why are you in the middle of nowhere?”

New muttering beneath his breath. “Because I like it?”

“Easy.” He used the same voice on her that he had with Caesar.

For some reason, it didn’t piss her off but made her tired instead. “I can’t tell you how much it’d help if you gave me some details as to who you are.”

Understanding and kindness rose in his eyes. “Fair enough. I’m former military, Army.” He lifted his slicker. Beneath it, he wore a Ranger sweatshirt. “When I left the service, I came home to Montana. Had a chance to get this property and took it.”

That didn’t make sense. “You’re so rich you bought this place and don’t have to work any longer?”

He grinned, his smile wide and inviting. “Don’t I wish, but no. Even if I had the funds, I’d still want to keep busy and offer my assistance to anyone who needs it. I’m in security, so to speak. I work on assignment. When each ends, I return here to wait for my next call.”

Sincerity rang in his voice and showed on his luscious face. More importantly, he wanted to help people. Still… She’d been cautious for so long, her misgiving lingered. “What did you mean by ‘so to speak’. It’s either security or it’s not. Which is it?”

“Do you always ask so many questions?”

She bounced in place. “I don’t know you.”

“Hey, I gave you my blanket, I’ve offered to call for help to get your car out, and I don’t know you either. Not even your name. Is it a secret?”

She looked to the side. “Kenzie Caltrane.”

His softened tone and big body called to her as few things had. She was fucking weary and scared, and simply wanted to melt into his arms and beg him to make things better. Which he couldn’t. One man who worked security didn’t have that power. Damn, getting involved in her problems might get him killed, too. “You shouldn’t have stopped to help.”

“Because you can’t.” The tears she’d held back for weeks poured out, turning into hitching sobs. “You’ll get hurt.”

“Hey, hey.” He gathered her to him in a protective caress. “Nothing’s that bad. No one’s that powerful. If your current or ex, or whatever, is after you, I can get you to a safe place and—”

His features slackened. “What?”

She put out her hand, warning him to keep his distance. “Go back to your cabin. Pretend you never saw me. Forget my damn name.” A new sob caught in her throat. “You can’t help.”

“Calm down, please.” He lifted his hands but didn’t touch her. “I’m not going anywhere. I sure as hell don’t intend to leave you out here alone to face whatever—”

“You. Have. To.” She edged back. “There’s no choice. If you think you can call 9-1-1 and fix this, it isn’t possible. The federal government is involved. They’ll bury you.”

Alarm sparked in his eyes then faded, resolve replacing it. “Involved in what? What are you talking about? Who are you?”

For once, she got in his face. “I’m a toxic truth to the feds and others. They don’t want me around. That’s why they’ve put a hit out on me.” 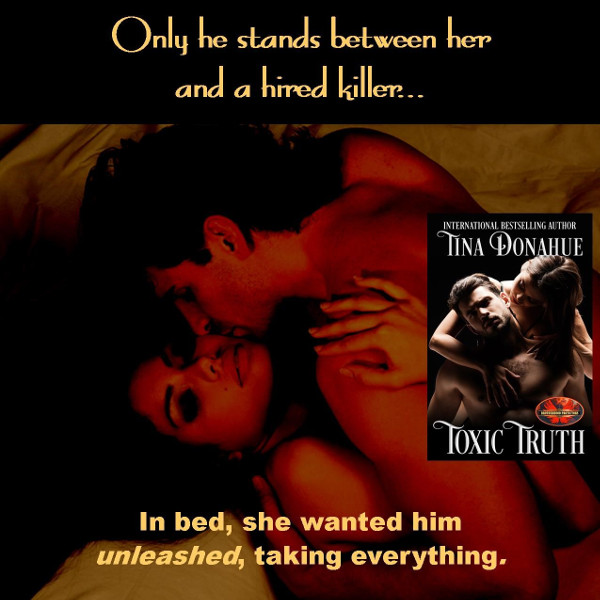