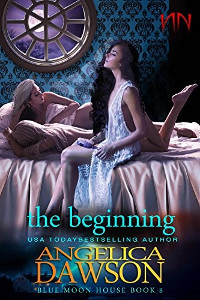 Sophia is on the run. A newly reborn vampire, she finds herself alone after an attack on her home. Running across Europe, she seeks a place to hide, and eventually, a place to fit in. She happens upon three adult sisters, orphaned and down on luck. If she can help them succeed, she might find her own success as well.

What would you do to find a family after yours was burned to ash?

How much pain could you stand to help a friend?

Where does a vampire really fit, anyway?

Arriving at Stephan’s tiny home, Sophia was relieved to find he, at least, was what she had taken him for, a young man starting off on his own. He released her arm to take her hand and pull her inside. She pretended to stumble and fall into him. He quickly put an arm around her shoulders and kissed her.

His hands didn’t move, but Luke’s did, sliding over her skirt and slowly hiking it up. His rough fingertips seemed to burn as they slid up her leg. He pressed into her from behind, pinning her between himself and Stephan.

Stephan broke the kiss just long enough to say. “You will stop us—”

“Don’t stop,” Sophia gasped, pulling Stephan’s face to her bosom. Luke worked her skirt up and his trousers down. She felt him hard between her buttocks and she rocked into him.

She kissed the top of Stephan’s head and then his ear, nipping it with her sharp teeth to open a small gash that she sucked until it closed. Before it did, the men had manipulated her and her clothing to their advantage, the loose laces of her dress opening for her breasts in front. Stephan held one, his thumb brushing her nipple, while he suckled the other.

Luke wasted no time penetrating her and his thrusts made her breasts bob in Stephan’s hand and face. Her breasts were aflame at the light brushing of his fingertips and lips and she started to squeeze Luke inside her.

Stephan moved his hands lower, taking up her dress where it was bunched and pulling it off entirely. Luke reluctantly let go long enough to remove the garment. Sophia dropped to her feet and then knees, taking Luke in her hand and grabbing for Stephan as soon as he freed himself. She sucked one cock while stroking the other, switching often and reveling in the sounds each man made.

Her own need grew as each man approached his own climax. Luke pulled her up, wrapped her legs around his waist and thrust into her roughly. Her head fell back in ecstasy as he filled her. Stephan’s arm wrapped around under her arms and over her breasts. Her head came to rest on his shoulder as Luke drove his cock in and out of her at a fever pitch. He wouldn’t last long, despite how desperately she wanted him to continue all night.

Stephan kissed and licked along her neck and she closed her eyes, turning her head to put her nose into his hair, under his ear. His cock left a hot sticky trail along her lower back and she knew in a few moments it would be his turn to fill her.

Angelica Dawson, USA Today best selling Naughty Nights Press author, has been writing for several years and having sex a lot longer than that. Angelica is a wife, mother and environmental consultant. Her love of plants and the outdoors is not diminished by the bloodsucking hoards — mosquitoes and black flies, not vampires.