Thanks for having me here today. I have so much to share with you! From Aug 15th my little cougar romance, First Floor: Cosmetics, goes on general release. This is the second book in The Department Store series. 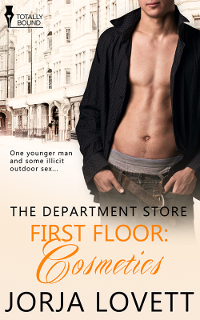 From the outside, it looks as though Maggie Fenton has it all. The glamorous head of the cosmetics department lives a life of luxury, but money definitely hasn’t bought her happiness. In reality, she’s married to a serial cheat who has made her life a misery for over a decade. With her husband chasing younger women, and her teenage co-workers’ catty comments ringing in her ears, Maggie’s resigned herself to being on the scrap heap. Until Jonah Hamilton puts temptation in her way and reminds her she’s still a red-blooded woman.

Commitment is a four letter word as far as Jonah is concerned. He has no intention of settling down when he has the whole world at his feet. The only reason he takes a summer job at Kelsey’s is to fund his travels. Well, that, and the sexy older woman he can’t help flirting with over the makeup counter. Maggie soon becomes a good friend and someone who shows him how good love can be.

The chemistry between them is undeniable but is a fling enough to satisfy their desires, or is it simply the start of something bigger?

Jonah blinked as Maggie disappeared out of the door faster than an alcoholic to a free bar. Her husband had really done a number on her for her to have such low confidence. Her self-esteem was so fragile, one joke had shattered it to smithereens. He couldn’t let her leave like that, thinking such despicable thoughts about herself. And him.

He left the rest of his pint to give chase. He didn’t know why it mattered so much that someone he hardly knew was upset, but he didn’t want to part with her on bad terms.

He dodged through the crowd, cursing himself. Any other sober, conscious of other people’s feelings dumbass would’ve realized she needed that reassurance her husband couldn’t give her. Instead, he’d laughed, convinced that the funny, warm, gorgeous woman with him would realize how daft she was being. Perhaps he’d been too cautious about letting his true thoughts about her be known.

All he’d done was to confirm her suspicions that she was nothing more than a has-been, when, in his experience, she was the most grounded, deeper than a fish pond, natural goddess he’d met in a long time.

He barged the heavy wooden doors open to see the smokers gathered outside in the last of the evening sun. With no sign of Maggie, he knew he’d blown it. Away from the cloud of smoke clogging his lungs, he scanned up and down Great Victoria Street. Among the student crowd, the young professionals and the theater-goers, he spotted her hot-footing it away, dabbing her eyes with a tissue.

He sprinted after her, not really caring who he knocked out of his path, but apologizing anyway. “Excuse me. Sorry. Move!”

Her steps slowed as she approached the traffic lights, giving him time to cover the distance between them. Before she could put her foot out onto the road, he grabbed her elbow and yanked her back.

“What the hell?” She stiffened, probably ready to batter her assailant with the handbag she was gripping like a deadly weapon. Only when she saw his face did she stop resisting.

With grim determination, he pulled her back the way she had come, not saying a word.

“Jonah? What’s going on? I need to go home.” The tone of her voice varied from loud, outright panic to quiet resignation. It only succeeded in driving him on in his quest.

When they reached the pub again, he dodged down the alleyway at the side. They didn’t need an audience. He pushed Maggie up against the wall, careful not to hurt her, but with enough force to stop her running again. He caged her between his body and the brick building. As she worried her bottom lip with her teeth, Jonah leaned down to catch it and draw it back out. She was soft and pliant, and her gentle scent intoxicated him further.

With a point to prove, he kissed her hard, plunging his tongue into her mouth to taste her sweetness and claim it for himself. Ordinarily, such an audacious move might’ve deserved a slap or a knee to the balls. Either would’ve been worth it. Instead, she went limp beneath him, submitting immediately.

He stepped back. “That is how you make me feel. How you should be kissed.”

Christ, the way she had responded to it made it a double sin that someone didn’t do that to her frequently.

Maggie stared back at him, her brow furrowed and her kiss-swollen lips parted and waiting. Beer or no beer, a certain part of his anatomy sat up to say hello.

Both he and Maggie stared silently at one another. Deep down Jonah knew he should be the one to walk away this time. He’d made his point. She was attractive and he fancied her. She could file that away for future reference the next time her husband went MIA. Jonah lingered on her moist lips a while longer.

“Do it again,” he could have sworn she said. 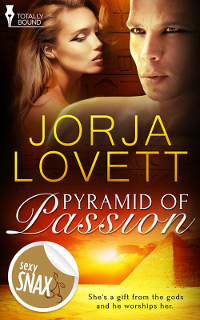 Rosie Carter can’t decide—should she act on her feelings for her real-life co-worker or lose herself in the fantasy of her Ancient Egyptian lover?

Rosie Carter’s cleaning job at the museum is far from boring. She starts her night shift by finding the security guard, Nick, screwing a redhead in the office. Running from her attraction to him, she distracts herself with the newly acquired Ancient Egyptian exhibit.

The Gold of Valor catches her eye—a pendant bestowed on the Pharaoh’s soldier, Edifu. Its mystical powers transport her into the bedroom of the man himself, who thinks she’s a gift from the gods and worships her with his mouth, his tongue…