I Do Like To Be Beside the Seaside – At Smut by the Sea! (@smutbythesea) 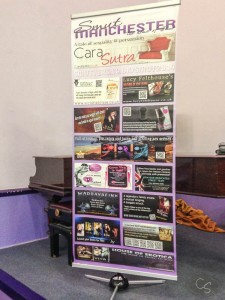 Yes, I know, I’m terribly behind in writing and getting this post up, but I have been stupidly busy all week, what with a new book coming out, and a bazillion and one other things to do. I’m sorry 🙁 *slaps own wrist* but I’m here now, so here’s my write up of Smut by the Sea…

This year, the journey up to Scarborough was a breeze. Last year we had to leave late afternoon, which of course meant we hit rush hour traffic, and it went to hell from there. This year, the other half and I zipped away around lunchtime and pootled north east until we got our feet wet. We had a few hours wandering, playing 2p machines and buying fudge, before we convened in The Black Lion pub to start the celebrations off right! We didn’t have too late a night, though, knowing we had to be up early and reasonably sensible the following morning. After all, I had to be all editor-like, and the other half had to be a book selling maestro! 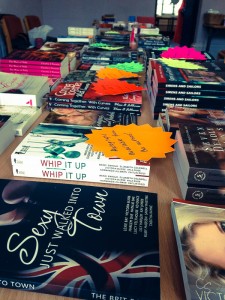 Saturday arrived without too much trouble, where we quickly realised one book selling table was not going to be enough – there were lots of awesome smutty books up for sale at a mere £5 each! The other half arranged them all (I don’t interfere – he likes things just so) while I wrote jazzy price labels, highlighted trilogies, exclusive tomes and encouraged folk to get their purchases autographed (what can I say – it makes us writers feel very special when we’re asked for an autograph!). 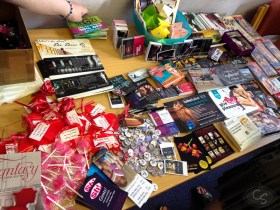 I’m sorry to say I missed the welcome session and the sessions from Victoria Blisse and K D Grace as I was still busy helping out on the book stall, putting swag on the lovely swag table and generally chatting with folk I see once a year if I’m lucky! By the time my session rolled around, I just about tore myself away from my lovely networking and headed in to the main room to be all editor-like. It was nerve-wracking indeed to see people sitting there who’ve been writing much longer than me and looking for editorial advice! I’d deliberately added in some interactive parts to the session so I didn’t just chat at people. Questions/prompts included: 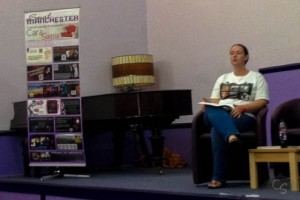 There was a great deal of frowning (which I was later told was a thoughtful expression), pursed lips, “eureka” moments and frantic scribbling, so it seems my session hit the spot for a lot of people. Hopefully I armed the group with enough information to increase their chance of impressing editors in future – or at least making editors’ lives easier.

Lunchtime ensued, which prompted a mass exodus to the groaning (with weight, not disappointment!) sandwich table, where I was delighted to see Cadbury’s Mini Rolls. Loooove me some Cadbury’s. I reconvened with my book selling maestro other half to let him know how the session had gone, and he let me know how book sales were going. It seems there’s been a definite shift over the past few years we’ve been doing this – people have gone from preferring anthologies to preferring novels, so I was very glad I had copies of Stately Pleasures available 🙂 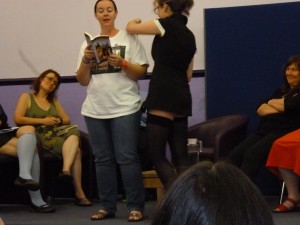 Next, Victoria Blisse started the Reading Slam, which was broken into two sessions so we could have a break in between for refreshments. I was in the last session, but went along to the first to cheer along my fellow readers, especially since there were a couple of first timers in there. Nerves were high, especially since Mistress Kay (also known as my lovely and not very scary at all friend Kay Jaybee) was dressed to thrill, armed with a stopwatch and a paddle, ready to apply said paddle to the arses of those that went over their allotted time. I think the audience enjoyed the anticipation of Mistress Kay stepping out from her podium and sidling towards the current reader as much as the readings themselves. I’m glad to report that there were some spankings doled out – namely to myself and Victoria Blisse! But I got my own back, for when Mistress Kay did her reading, I took over as timekeeper got in a sneaky thwack on her bottom! The crowd were most impressed – I don’t think they’ll forget that in a hurry 😉 It was fantastic for me to read out loud from Stately Pleasures for the first time, and I’d deliberately picked an utterly filthy bit, which seemed to go down well, if you’ll pardon the pun! 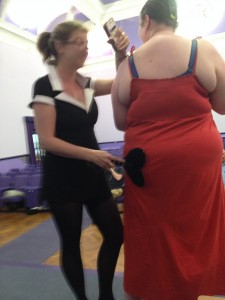 Victoria Blisse Gets Spanked! (Photo by Me!)

After a sad goodbye and rounds of thanks to attendees and the wonderful sponsors, other half, myself and others helped Victoria and her hubby Kev pack everything down, clear up and make sure Scarborough Library was left more or less as we’d found it.

But the fun was not over! Folk staying in town overnight headed to The Black Lion once more for (absolutely terrible) karaoke (except for Victoria and her sister, who were, um, better), lots of giggling and chatting and annoying the other punters by totally ignoring the football match. Much of what happened will stay between those four walls I’m afraid, but needless to say there was much laughter and rude talk! 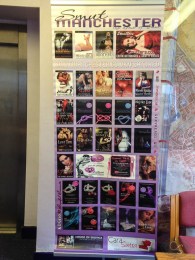 And that, my friends, is Smut by the Sea in the smallest nutshell possible. My highlight, as always, was seeing old friends and meeting new ones, most especially the members of The Brit Babes Street Team who attended, where I was able to give hugs and get to know them better, after corresponding online for so long!

There is a come down after every one of these events… people not chatted to, or not for long enough, people who couldn’t make it… but the bright side is in just a few months, we’re doing it all again, but in the city. Yes, Smut Manchester is nigh! The event is still in its planning stages, but I’m already hearing whispers of fantastic sessions, cool readings and lots more naughtiness. So if you can get to Manchester, England, on 15th November, I’ll see you there!

4 Responses to "I Do Like To Be Beside the Seaside – At Smut by the Sea! (@smutbythesea)"