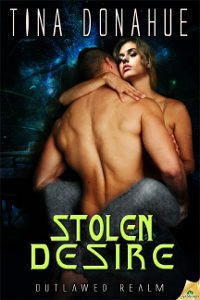 Her freedom depends on one man. A criminal to his realm…

One minute, Paige Ross is outside a Seattle bar, grieving a failed engagement. The next, she jerks awake in a weird, candlelit room with velvet walls, black silk sheets, and a man who motions for silence.

Paige has little choice but to trust the powerful stranger who promises a way out of what looks like Satan’s brothel. And pray his promise to keep her safe is as real as the heat burning in his eyes.

Banished from E2’s ruling elite for supposed crimes against the realm, Zekin risks everything to rescue those brought to E5 for the guards’ carnal pleasure. Paige will be leaving this inhospitable realm of fire and ice—if he can somehow forget the way her trembling body melts in his arms.

Safe—temporarily—in an underwater world populated by strange creatures, Paige’s sexual awakening explodes into an unquenchable need that consumes them both. But the guards will be looking for her. And Zekin’s plan to send her home is a dangerous journey she cannot—will not—take without him.

Warning: Scorching-hot sex and loads of aching tenderness between a drool-worthy hunk who’s determined to do the right thing and a woman who’s not about to give him up.

Thick gray clouds rolled above them, heavy with more snow. A sliver of bluish-white light poured through a gap in the cloud cover, as though the moon were trying to bleed through. Its rays swept across the land, which shimmered in the frail glow, sparkling like thousands of diamonds. The effect lasted only a moment, and then the light receded, with shadows once again taking over the hostile terrain.

As though that worried him, Zekin increased his already fast pace, pausing only once to shove her clothing into a snowdrift, burying it.

Paige wasn’t able to ask. She struggled to keep up, gulping air. It should have been icy, hurting her throat, but wasn’t. The transparent mask no doubt heated it. How was that possible? Desperate for answers, she cried out, “Where are we going?”

Zekin looked over. “A colony where you’ll be safe.”

Paige dug her fingers into his hand. “Where are we? What is this place?”

What in the hell was that? A government installation where scientists conducted classified studies and had pleasure slaves on the side? That made absolutely no—

Instinctively, she held back. Just as quickly, Zekin yanked her forward.

“Don’t fight me,” he warned, “or you’ll end up like the others you saw outside the guards’ outpost.”

Paige shivered so badly, her voice shook. “Did those bastards throw the bodies out there after they murdered those people?”

“Only some. The others they pushed out there to die.”

“They weren’t useful any longer.” Again, he glanced over. “When one of the guards found you and brought you here, they got rid of the other woman. That’s what they do when they tire of females from your realm, or the pleasure slaves they haven’t already killed.”

Paige was about to pepper him with more questions. Instead, her mind snagged on one word—realm.

“You mean country?” Maybe she’d been wrong about his nationality. It wasn’t Greek or Middle-Eastern but Russian. Could be this was Siberia. In a weird sort of way, that made sense. “Is that what you meant—my country? The USA? America?”

He regarded the landscape past her. “We have to hurry before the other guards return and see us.”

Paige couldn’t imagine how that was possible. The material covering them was the same tint as their surroundings, making them virtually invisible…unless the guards had some kind of special eyewear, like night-vision goggles, that allowed them to see what the naked eye couldn’t. “How far is the colony?”

“Past that body of water.” He gestured toward what appeared to be an enormous frozen lake ringed by drifts.

As Paige scanned the area beyond it, searching for some sort of building, a flock of birds flew over the lake. At least she thought they were birds. Their thick feathers were an ashy white, their wingspans enormous, like nothing she’d ever seen.

They flew in an odd formation, not the usual V pattern, but in a perfect circle. Paige couldn’t help but stare at the phenomenon. How in the world did they do—

A thunderous crackling sound interrupted her thoughts, and the again screeching wind.

She flinched. Zekin released her hand and moved in front, his body pushing hers back, shielding Paige as something shattered the ice from beneath the center of the lake. Within seconds, a creature pushed through, hurling its milky body upward. The waves that followed it froze instantly in the raw air, the ends of the water curled over like a fine crystal sculpture. As massive as a blue whale, the creature surged from the lake, a horn protruding from its snout, no doubt what pierced the ice. With blinding speed, it penetrated the circle made by the birdlike creatures.

Shrieking wildly, they scattered, but it did no good. The whale-like thing swung its monstrous head back and forth, gulping several of the creatures before gravity pulled it back down to the water. A thin sheet of ice formed instantly, hiding its exit. Harsh winds toppled the frozen waves as easily as if they’d been a house of cards, then pushed them against the snowdrifts, returning the scene to the relative calm of a few minutes before as though none of the carnage had occurred.

Paige continued to hyperventilate. What kind of fucking nightmare had she stumbled into? Was it possible she’d been drugged and was hallucinating? If not… Aw crap, she didn’t want to think about that.

“There’s nothing to fear,” Zekin assured. “The thing has had its fill for the moment. It won’t harm—”

Her embrace stopped him. She clung to Zekin, her face pressed against his back, praying he wouldn’t push her away. “Don’t leave me, please,” she begged.

Her fiancé, Johnny, had done that, calling off their wedding after she’d worked so hard on the plans and getting him to want her. He never apologized. He’d just told her the score, saying they could still live together. As if she’d want that. Before he’d bugged out on her, her mother and then eventually her father had also left. She’d had no one for too long and by God, right now, Paige needed the warmth of Zekin’s body, the security and comfort of his size to preserve her sanity. To give her hope that they’d both get through this.

“I won’t,” he murmured. “It’s all right.” With his hands on her wrists, Zekin gently pulled her arms from him but didn’t step away.

If he had, Paige would have followed. Out here, she had no shame, no pride, just an unbearable need to be close.

He turned to face her, then hesitated only a moment before wrapping his arms around her in a sheltering caress. She couldn’t stop shaking. As he ran his hand down her back, he whispered, “You’re safe.”

No, she wasn’t. Neither was he. Not out here in arctic-land. Deep inside, Paige was terrified they weren’t on Earth any longer. It was crazy to even consider that, but how else to explain all of this? How could either of them survive? Why had he even risked his life to rescue her? Who was he? Where had he come from?

She pressed her cheek against his shoulder. The transparent material covering her face was exactly like skin, letting her feel his solid frame, his heat. She snuggled, unable to stop herself, indulging in this small, welcome intimacy as the world went crazy around them.

The wind died for a moment, then picked up again, slamming against her body as it screamed past. Clouds continued to sink, weighted with snow.

His hand stalled on her back. “For what?”

Being scared and being a burden, asking too many questions, not knowing how to make this better. All her life, Paige had done whatever she could so people wouldn’t leave her. Didn’t work. They always had.

“Getting you into this,” she finally said.

If she hadn’t had those stupid drinks at Rozie’s, if she hadn’t gotten involved with Johnny—a damn fool who couldn’t commit to marriage much less save her ass out here—none of this would have happened.

“You had nothing to do with this,” Zekin said. “It was my choice to come.”

Other books in the Outlawed Realm series:

Tina will choose one commenter as her winner. Winner gets her choice of one of Tina’s award-winning, bestselling ebooks from this list:

9. SiNN – Nominated for Book of the Week LASR