Good morning. Recently I’ve crossed over into a new realm in my writing. I’ve done the M/M as well as the M/F. My latest, I Like Em’ Pretty is out now. And once again, I’m bringing a lady into the mix but this time, the men aren’t the couple. One of the males and the woman are. How different is that! Add to that mix the man has an attraction to the other guy and the feelings are mutual. Whoa! That sounds like tension but with only 15k to work with you can only solve so many problems. So needless to say, I have a full and a sequel coming for these characters. *adds to the already long list* That’s the fun thing about being a writer. A new plot bunny will always pop up even when writing a new story!

So what about my latest, Comet? Gabriel “Comet” Marrisco and his wife Shelba are happily married but Comet is attracted to Denny Brothers a charity worker who visits his veterinary clinic all the time. What to do? You have to find out in my book. Look for the next books to come out in 2013 at some point. *grins* I’ll keep you posted when they do. 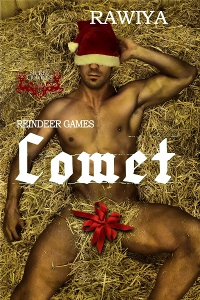 Gabriel “Comet” Marrisco is blessed with good looks, has a great career as a veterinarian and has a lovely wife named Shelba however, in December, he’s obligated to take off and be part of Santa’s Sleigh Team of Reindeer. Because of his deal with Father Christmas, he must make a regular human’s Christmas better than the last and grant a wish.

Denny Brothers, well respected charity worker, young, handsome, and unfortunately socially inept is searching for a boyfriend. Denny has never had a man and Father Christmas has asked Comet to find him a date and assist him in falling in love with someone else. However, Denny has a crush on Comet and the feelings are mutual. Will Comet be able to find him a mate when he wants him for himself? His very livelihood depends on his decision.

After visiting Gabriel in his office, Denny ran home to his beloved dog and lonely apartment on the north side of Chicago. His place was at the end of a quiet block in Lincoln Park, where many professionals lived. He’d had the studio for three years and loved the area because he could access all the shops and attractions by walking or bus. Not only that, his job at Cancer Charities was less than twenty minutes away, which made his decision to stay in the neighborhood even easier. Why move when he had everything right here?

Denny welcomed the chilly air after feeling Gabriel’s heated gaze upon him. He hoped the doctor hadn’t noticed the tent in his pants while they had talked. Denny had noticed Gabriel’s crotch several times and couldn’t help but stare. Too bad they couldn’t have taken care of one another properly.

With keys in hand, he opened the door to a three flat brownstone and sprinted to the first floor apartment. Although Denny’s place paled in comparison to others in size, it never bothered him because it was only him and Preston. And despite the fact property values had more than doubled since he’d moved in, his landlady, Mrs. Bagley, hadn’t increased the rent. She claimed to like him, especially since he always helped do yard work and small fixes around the building. Denny appreciated the elder lady’s generosity.

Preston’s tail wagged behind him while he stood on his hind legs to greet Denny.

“Good boy. You’ve been a good dog today, huh? It’s not real cold outside so we can take a walk to the store and get some more of those treats you like.” Denny removed his jacket and hung it up on hook. He knelt down in front of his dog and rubbed under his chin while nuzzling the animal’s cold nose. “Whew, you need a bath and your teeth cleaned. Are you gonna be patient and let me clean you up?”

Seemingly the lab didn’t like Denny’s suggestion and whined in response.

“Aw c’mon boy, we might be going somewhere for the holiday. You know Doc Gabriel, right? Well, he invited us over for Christmas. You can’t go there smelling bad, you know. There’re other dogs for you to play with.”

When Denny mentioned that, the dog gave a hearty bark and licked his face as though he understood.

“Okay, okay, good, I knew that would sway you.” Denny laughed and stood up straight, then sighed and glanced at his empty place. “Well at least we might have a little fun on Christmas, Preston.”

Slowly, he walked to the mantle above the fireplace with Preston panting and wagging his tail while he followed. Attempting to hold back the tears, he stared at the picture of his family photo from four years ago, one of the last taken before he’d come out. They all looked so happy together, his father holding him tightly and mom leaning against his other shoulder. Denny was their only child and unfortunately, they couldn’t get past the fact he was gay.

Months later, they had thrown him out the house, telling him to never return until he had repented and married a woman. Denny’s folks were religious fanatics who didn’t believe someone could love their own gender.

Despite that, Denny didn’t hate his mom and dad. He still loved them and hoped they would understand his admission one day. Perhaps they could be a family again, but Denny wasn’t holding his breath. He’d prayed about it himself, but he knew it would take a miracle for that to happen. They hadn’t called, written, or even tried to come see him in three years. “Hope you’re havin’ a great holiday Mom and Pop.” While a tear slid down the length of his cheek, he traced the photo, wishing they’d at least return his calls. Regardless, he’d continue hoping they would give in.

Denny set the photograph down and turned to his dog who lay on the hardwood floor with his paws on his head. He wiped the moisture from Preston’s face and patted him. “Alright pal. We’ll just take the walk and I’ll save the bath and teeth cleaning for tomorrow. I don’t much feel like it anyway.”

Right then, the lab perked up and licked Denny’s face while he barked loudly.

“You’re happy about that, huh?” Denny held him close and planted a kiss on the animal’s head. “I’m too tired. I’ll get it done before the charity event since I’m taking you with me. Let me change so we can take a quick walk then. C’mon, boy.” He rose up and walked to his bedroom while he loosened his tie.

Preston jumped on the bed and watched him remove his shirt and search for a tee to put on.

While he looked, he thought back to the conversation he’d had with Gabriel at the office. Why did he come on to him like that and embarrass him? Gabriel had to have known Denny had a huge crush on him. He got an erection just thinking about the vet. Why did he have to be married? Yep, his wife stood in the way of who Denny considered to be his perfect match and now, he’d invited Denny to stay at his house for the holiday. Just what was he trying to do?

Denny wished he’d turned him down, but he just hated the idea of staying home alone for the fourth straight Christmas. At least Shelba and Gabriel would be good company and he’d get a great meal out of it, too.

Better than staying home with no one to talk to. Sure it would, but being around Gabriel would be torture the whole time especially when he couldn’t do anything about his feelings for him.

Darnit, why didn’t I meet him first?

RAWIYA is the more sensual erotica writer in the BLRawiya duo. She loves multiracial characters who overcome obstacles other than race. Sweet, sassy, and spicy would be the best way to describe her work. Happily married mother of two, loves music, computers, and travel. She blogs regularly at Wickedly Sexy Writers. For more please visit the Rawiya’s blog on WordPress.