All Books Half Price at All Romance eBooks!

Wow, I just got the email to notify me that all eligible books are HALF PRICE at All Romance eBooks for today only. It includes all of mine!

So, what are you waiting for? Head over there and grab:

Coming Together: In The Trenches for just $1.50.

The House of Erotica Witching Hour for just $4.00.

You get the picture – bargains galore!

My All Romance eBooks author page is here: http://www.allromanceebooks.com/storeSearch.html?sortBy=recentlyAdded&searchBy=author&qString=Lucy+Felthouse

Spooky Smut in the City 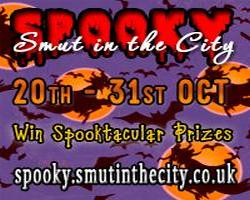 The brief for the hop was that my post should be sexy and scary, not wet your pants scary, which actually, is utterly perfect for me. Because that sums up what I like as a person, and what I like to write. I have such a vivid imagination that I won’t read serious  horror books or watch horror films. I wouldn’t sleep – and that’s definitely not a good thing. I’m terrifying when I haven’t had enough sleep!

Then he kissed me. Once my body processed what my brain was screaming at it, I reacted. I pushed his chest as hard as I could, then ducked out of the way, moving for the door.

Before I could get even halfway to the door, he was on me again. He gripped me around the waist and pulled me to him. He seemed not to notice my stamping hard on his foot, or elbowing him in the ribs. He didn’t even blink when I slapped him in the face. But his pupils seemed to grow and he grabbed my wrists and slammed me against the wall.

I’d never been so turned on in my life. And the realization shocked me to my very core.

Dracula’s lithe yet fiercely strong body had me pinned to the wall. I was completely helpless. When he bent to kiss me again I didn’t resist. It was like he’d put some kind of spell on me. If vampires were real, I’d have said he was glamoring me. Part of my mind knew I didn’t even like the guy, let alone want to do anything with him. But the rest of it, and my body, wanted him naked and fucking me like there was no tomorrow.

In the blink of an eye, he’d swept me up in his arms like some helpless damsel in distress and carried me to the bed. All the drapes were pinned back so he deposited me on the mattress before climbing in after me. Then he went about closing all of the curtains, leaving us cocooned in complete darkness.

I lay waiting for his next move. Oddly, I was no longer scared. I was truly living for the here and now. And, let’s face it, who knew how much here and now I had left? Whatever spell he’d put on me, it was a good one.

I felt him move beside me, then a cool hand slipped around my face and turned it towards him. His lips met mine once more, and I opened my mouth. His tongue slipped inside, caressing and dancing with mine until I was dizzy with lust. I could feel his erection pressing against my hip and smiled to myself. He wanted me as much as I wanted him.

Don’t forget to head back to http://spooky.smutinthecity.co.uk tomorrow for the next post. Happy hopping!