Hi everyone, and welcome to the fifth day of Blissemas. Actually, despite the title of my blog post, I’m really not bothered about mistletoe (don’t need it to give my OH a kiss!) and I can’t stand wine. Horrible stuff. Vodka or cider are my poisons of choice 😉

Anyway… for those of you that have taken part in previous Blissemas events, you’ll know I’m actually not the biggest fan of this time of year. Winter and cold are really not my thing, and I think retailers and advertisers are ruining Christmas by forcing it to start as soon as Halloween is over and done with. By the time I get to December I’m fed up with it, never mind the 25th! Sorry for being all bah humbug 😉

All I really want this Christmas (you know, apart from a lottery jackpot win or Jeremy Renner naked except for a bow) is some time off work and some rest and relaxation. It’s been a really tough few months for me and my family, so I’m looking forward to chilling out and eating lots of naughty food. And probably watching crap telly. 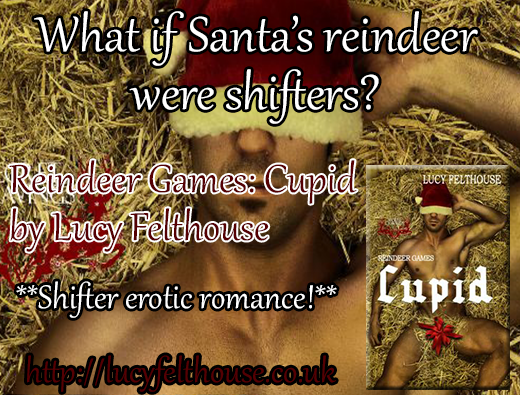 Reaching down to make sure she was ready for him, he looked up at her, startled, when she grabbed his wrist. “What?”

“Nothing. Just trust me, I’m wet enough. I want to feel your cock stretching me.”

“Fuuuuuuuuuuck!” he howled, his brain struggling to catch up with the sensations he was experiencing. She was wet, hot, and so fucking tight.

He looked down at Carina’s face, which held an expression of wonder. He kissed her lightly on the lips, before asking, “Are you all right?”

She nodded emphatically. “Yes, I’m just… I don’t know. I’ve never had it like this before.”

He knew what she meant. They’d only just started the main event, and already it had surpassed anything he’d ever experienced before. “Me either, and I’m not just saying that.”

“I know.” The look in her eyes was soft, adoring, and it became more so as he began to rock his hips. He grunted as she tightened her internal muscles against him.

“Hey,” he said gently, “Stop that. You’re driving me crazy enough without cheating.”

She giggled, then reached up to pull his face towards hers. Their lips met in a tender, yet bruising kiss that was laden with intent. Carina’s tongue forced its way into his mouth, and she sucked at his tongue, mimicking the actions his cock was making inside her.

A guttural moan emanated from his throat. This woman would be the death of him. Sexy. Fucking. Wench. His hips thrust in time to the words, and he picked up his pace, deliberately rolling his pubic bone across her clit with every stroke. The noises coming from the beautiful woman beneath him told him that she was enjoying herself just as much as he was, and it was just as well because he was holding back. His need for her was such that he wanted to go faster, harder, to thrust into her until she screamed so loudly the neighbours would hear.

He pulled away from their kiss, sucking in a huge breath. “Babe, you feel so good. I want to go faster, but I’m afraid I’ll come too soon.”

Carina’s eyes glinted, and she gave a wicked smile. “Give it all you’ve got, big boy. We’ve got all night.”

Laughing at her choice of words, he kissed her again—he just couldn’t get enough of those lips—then raised himself up once more and began to fuck her for all he was worth. His job—not to mention his species—meant that he was fit, and he got into an incredibly fast and furious rhythm. His gaze met hers, and they just looked into one another’s eyes in awe and wonder as they allowed their pleasure to wash over them, again and again, until it reached fever pitch.

“Oh,” he said, gritting his teeth to try and delay the inevitable, “I’m going to…”

Carina said nothing, instead bobbing her head up and down in agreement.

Taking extra care to stimulate her clit with each stroke, Cassius continued pounding into Carina’s wetness until his second orgasm hit him, with next to no warning. The shock made him lose control of his words, and as his cock twitched, spurting into the condom, he said, “Unnhh… fuck… I fucking love you. I love you.”

It wasn’t until he opened his eyes and looked into Carina’s wide, stunned ones, that he realised what he’d said — but she didn’t recoil, or laugh at him. Instead, she reached up to stroke his face, and said softly, “Do you mean that, or was it just the heat of the moment?”

Add it to your Goodreads shelves: https://www.goodreads.com/book/show/16161416-reindeer-games

By commenting on this post you get one entry into the Blissemas grand prize for a Kindle Paperwhite stuffed with smut. For a list of rules and other Blissemas blogs please check http://blissemas.co.uk.