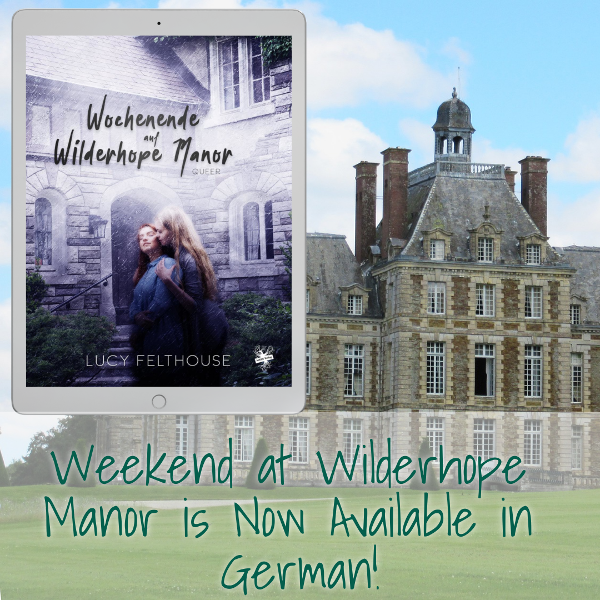 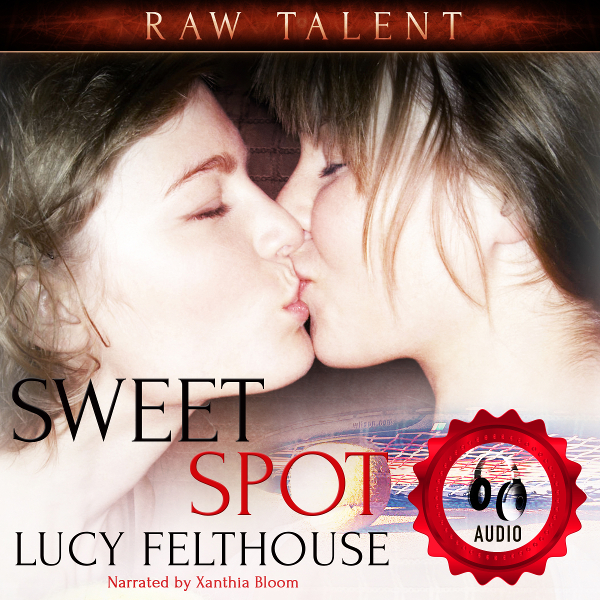 I’m delighted to be stopping by to let you know that Sweet Spot is now also available in audiobook format! Narrated by the super-skilled Xanthia Bloom, you can hear the story brought to life!

Virginia Miller is an up-and-coming tennis star. She’s gone from a ratty tennis court in a park in south London, England, to the world’s top training facility—Los Carlos Tennis Academy in California. In awe of the talent around her, Virginia is all the more determined to make the most of the opportunity and show that she’s worthy of her place there. Her mentor, Nadia Gorlando, has every faith in her.

But Virginia finds herself distracted—Nadia, as well as being a top-notch tennis player, is seriously sexy, and Virginia’s mind keeps wandering where it shouldn’t. Will her crush get in the way of her career, or can she find a way to push the other woman out of her mind before it’s too late?

Thrown to the Wolves by Naomi Clark (@naomi_jay)

Thank you for having me today! I’m here with my new Romance on the Go, THROWN TO THE WOLVES. This story was partially inspired by an article I read on Romania’s Hoia Forest earlier this year. It’s long been famous for paranormal activity, from UFO sightings to the strangely shaped trees. Some people believe it’s a gateway to another dimension, whilst others say it’s haunted by the ghost of murdered peasants. There’s a rich history of folklore and urban legend growing there, and so what better place to set a paranormal tale?

I’ve stayed away from UFOs and ghosts, though, and instead gone with vampires and werewolves. Well, it is Romania! In THROWN TO THE WOLVES, aspiring author and tattooed tomboy Paige goes hunting for inspiration. And she finds it…along with danger, ancient enemies, and of course, love. I hope you’ll enjoy my little venture into the Hoia Forest! 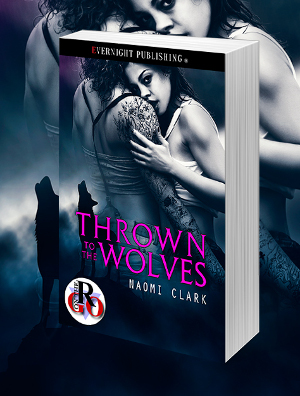 Paige went to Romania looking for inspiration for a book. She found herself caught in a horror story. Attacked and left for dead by a vampire, Paige finds herself at the mercy of Kata, a beautiful, enigmatic werewolf. Their attraction is instant, but Paige’s fate hangs in the balance. She may yet be turned into a vampire herself. Soon it’s clear to Paige that the only way to save herself may be to return to the woman who attacked her…even if it means placing both herself and Kata in the greatest danger.

This was her rescuer, she guessed. She’d gone from the jaws of a wolf to the bed of a woman, so someone had rescued her. But there was nothing about this woman that said “safe” or “friendly.” She was regal, imposing, and her silence was intimidating. But Paige didn’t have it in her to sit meekly and say nothing. For all she knew, she could be worse trouble now, with this woman, than she’d been out in the woods or with the creature she’d fled in the first place.

The memory of the woman who wasn’t a woman made her shudder, and she touched her throat. She felt dried blood and a dull ache, and it forced her to speak.

It was probably the wrong thing to say. She should have said thank you, or asked where she was, or even asked the woman’s name. But those questions didn’t matter even a tiny fucking bit. Not after the nightmare she’d found herself in.

The woman laughed, a rich sound that made Paige think, incongruously, of sticky toffee pudding. “You are smarter than I thought,” she said in heavily-accented English. “When you see a woman lost in these woods at night, you don’t think she can be very smart.”

Unnerved, Paige sat up slowly, pulling the rough duvet up with her. She was still fully clothed, she realized, but the duvet gave her a sense of security anyway. Stupid, but true.

“My name is Kata,” the woman continued. She turned to a small, rough-hewn table at the bedside. A jug of water and a glass sat there, and she filled the glass before offering it to Paige.

Paige ignored it, despite the dry thirst gnawing at her. “I didn’t ask your name.”

Kata gave her a mock innocent look, eyes wide. “Sorry. Perhaps my English is not so good.”

Paige thought Kata’s English was probably fine, certainly better than Paige’s Romanian. “What are you?” she asked again, louder and slower this time, in that ignorant manner so many Brits abroad used that she hated. Her voice shook as she spoke, but she managed to hold Kata’s gaze and she was proud of that.

Kata set the glass down and pointed to the wound on Paige’s throat. “You have seen things already tonight I think you would not believe, yes? So I will ask you, what do you think I am?”

Her voice was gentle, with genuine curiosity in the question. And Paige thought about it, and thought she could fall into hysterics or rage, deny what her heart already knew and claim it was impossible. It would be easy—nice, even—to do that, because twelve hours ago, she would have said it was impossible, and she would have laughed at anyone who told her otherwise.

So she said the impossible words. “I think you’re a werewolf.” 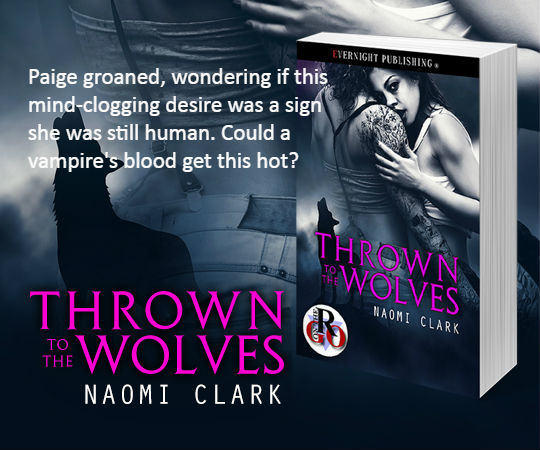 Naomi likes writing, perfume, fancy tea, and unfathomable monsters from the dark spaces between the stars, not necessarily in that order. She has been writing stories ever since she learned how to write, but is still trying to master the art of biography writing. When she’s not dealing with werewolves, demons, or sea monsters, she’s hanging out with her cat and probably watching a documentary about Bigfoot. If the cat isn’t available, she’s with her fiancé watching cookery shows and silently plotting her next book.

My Sexy Saturday #106 – Her tone told me that it was going to be something fun. #MySexySaturday

Welcome back to My Sexy Saturday! This is where writers post either 7 words, 7 sentences or 7 paragraphs from their published work or work in progress. Things are still utterly chaotic here, so I apologise if I don’t get around to visiting the other posts. I’m sharing some more from my re-released lesbian sports romance, Sweet Spot. 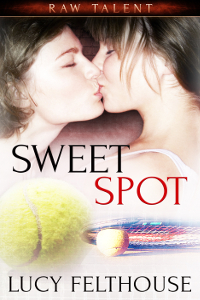 Nadia chuckled. “Of course not. He may be coaching Travis Connolly and Rufus Lampani for the US Open, but that doesn’t mean I’m going to clean up his mess.” She pointed with her chin over to the machine Peter had just vacated. “Come on, V, I’ll show you how I’m going to deal with this.”
I followed her, grinning. Her tone told me that it was going to be something fun.

Mid Week Tease: But I was determined, if nothing else. #MWTease

Welcome back to Mid Week Tease! Things are still completely chaotic here, so I apologise if I don’t get around to visiting the other posts. I’m sharing some more from my re-release, F/F sports romance, Sweet Spot. It’s available on all of the usual eBook retailers now.

I remained in my seat for a couple of seconds, utterly stunned, as Travis Connolly’s grand slam victory was announced. He’d done it! In spite of his accident, his hard work had paid off and he was now racing off the court and toward his team—Peter, Marie, Austin, Samuel and a few others. I was a few rows back, which was perfectly understandable given that the only link I had to Connolly was the fact we shared the same training facility. Though looking at him now, he probably didn’t need Los Carlos any more. He was back on form, the world at his feet once more. Hopefully, if I worked hard, I’d be in his position one day. Not winning the men’s title, of course, but I, Virginia Miller, could be another British tennis champion.

I had a long way to go, obviously. I wasn’t even seeded yet, never mind in the upper echelons. But I was determined, if nothing else.

Shaking my aspirations from my thoughts, I carefully pushed my way through the excitable crowd to get down to the group from Los Carlos. I knew I was lucky to be there in the first place. As someone so low down on the sporting career ladder, I should really have been back at the academy, working my arse off, but apparently Austin had been feeling generous and thought I should have first-hand experience of a major tournament. I hadn’t had the heart to tell him I’d been to Wimbledon a couple of times already. It had practically been on my doorstep back in London, and a visit at an early age had sparked my love of the sport in the first place. Plus there was no way I was going to turn down the chance to visit a foreign tournament. Especially since Nadia was playing. And she’d gotten right through to the final.

And add it to your Goodreads shelves here: https://www.goodreads.com/book/show/21521972-sweet-spot

My Sexy Saturday #105 – “The world’s number one can’t wait.” #MySexySaturday

Welcome back to My Sexy Saturday! This is where writers post either 7 words, 7 sentences or 7 paragraphs from their published work or work in progress. Things are still utterly chaotic here, so I apologise if I don’t get around to visiting the other posts. I’m now sharing from my re-released lesbian sports romance, Sweet Spot.

My jaw almost hit the floor.

Now Nadia rolled her eyes, looked over at the offending machine, then back at Peter. “Sure, I understand,” she said, as cool as ice. “The world’s number one can’t wait. Go right ahead—I’ll fix it for you.”

He babbled a load of thanks, then jogged out of the gym.