The Witches of Gloucester by Lisabet Sarai (@lisabetsarai) 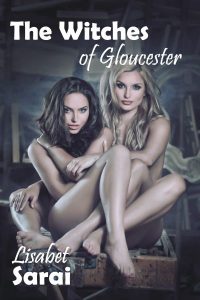 The historic port of Gloucester, Massachusetts has a special charm, due at least in part to its resident witches. For decades, raven-maned Marguerite and red-headed Beryl have lived among its hard-working inhabitants, making magic and mischief. Love and sex fuel their supernatural abilities, but duality limits their power. To reach their full potential, they need a third witch to complete their circle.

Sparks danced along Em’s naked skin in the wake of Beryl’s fingers. Naked? When had she removed her clothing? Her eyes fluttered open. Shadows hung in the opulent room, shaped by candles that flickered on the mantel. It was nearly midsummer. How could the night have come so quickly?

Embarrassment, wonder and need warred within her.  Arousal coursed through her body in shimmering waves, so intense it was almost pain. She found herself splayed nude upon the carpet, arms flung out and erect nipples pointing at the ceiling. Her knees were bent, her thighs spread wide in lewd invitation. Moisture seeped from her exposed cleft, dampening the silky nap of the rug beneath her.

Beryl knelt in the gap between Em’s legs, equally naked, her porcelain-pale skin gleaming in the dimness. Candlelight struck glints from her coppery crown. Emmeline couldn’t help staring at the matching tangle hiding the woman’s sex. She ached to part that auburn curtain and taste the moist flesh it concealed.

The older woman grinned. Mischief glittered in her emerald eyes. “Time enough for that later, girl. The first climax must be yours. Trust us. We won’t harm you. We just want to teach you who you are.”

We. The plural made Emmeline wonder about Marguerite.

“I’m here, darling.” The lilting, cultured voice came from behind her. Em twisted backward. Marguerite knelt just above her head, thighs parted, buttocks resting on her heels. The tawny beauty’s pubic curls were mere inches from her own silvery locks, releasing clouds of tidal perfume. Flawless butterscotch-brown skin stretched over Marguerite’s lush breasts and swelling hips. Sleek muscles shifted under the smooth surface as she leaned over to brush her lips across Emmeline’s.

Even that brief contact sent lightning sizzling to Em’s cunt.  For an instant she teetered on the edge of climax, before the luscious pressure subsided.

“Shall we take you, Emmeline?” Maguerite’s question wound its way into Emmeline’s consciousness, through a haze of lust. “You must ask us. The ritual requires it.”

LISABET SARAI writes in many genres, but F/F fiction is one of her favorites. Her lesbian erotica credits include contributions to Lambda Award winner Where the Girls Are, Ippie-winning Carnal Machines, Best Lesbian Romance 2012, Forbidden Fruit: Stories of Unwise Lesbian  Desire,  and Lammy-nominated Coming Together: Girl on Girl. Her story “The Late Show” appears in the recently released Best Lesbian Erotica 2015.

Lisabet holds more degrees than anyone would ever need, from prestigious educational institutions who would no doubt be deeply embarrassed by her explicit literary endeavors. She has traveled widely and currently lives in Southeast Asia, where she pursues an alternative career that is completely unrelated to her writing. For all the dirt on Lisabet, visit her website (http://www.lisabetsarai.com) or her blog Beyond Romance (http://lisabetsarai.blogspot.com). 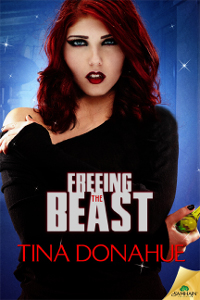 Magic is Becca Salt’s business, but it ain’t happening in her bedroom. The half-witch proprietress of From Crud to Stud performs miracle makeovers for paranormal creatures. Once she’s done with them, they’re out the door hunting for hot babes, not hanging around for a too-curvy, plain Jane like her.

Her newest client is hot, hung, mouthwatering perfection. What could she possibly improve upon?

Eric Diletto. Descendant of Cupid, bred for courtship, courtesy, and all that other gentlemanly junk. What has it gotten him? Dumped time and again for bad boys. He needs Becca’s help for an entirely different reason—regression therapy to release his inner beast. Grrrr.

Two potions later, they’re crawling all over each other. Becca aches for a man who loves her as she is, not because he’s under the influence. But Eric isn’t as impaired as she thinks. And he intends to take Becca here, there, and everywhere—anything to convince her his desire isn’t just the potions talking.

A witchdoctor’s nightmare. Contains potions with weird side effects, a sorceress with limited magical skills and a yearning heart, plus a minor god who wants to get down and dirty. Bad, bad boy!

From the next room, something rammed into the wall.

“Don’t do that,” a woman warned. Her gravelly voice sounded as if she’d been gargling with Dr?no.

A hiss from Hell answered her, followed by more pounding that shook the photos hanging in here. All depicting the French Quarter with weird symbols gracing the edges. Greek? Martian? Who knew?

Despite the redhead’s allure, it was definitely time to get out of this looney bin.

Eric shoved his feet into his loafers and pulled on his shirt, not bothering to button the damn thing. With his boxers dangling from his front pocket, he moved cautiously to the door and put his ear against it.

Would he have to fight his way out? He knew some martial arts but wasn’t a whiz at it like Neo who’d spun like a human tornado in The Matrix. Hell, he wasn’t even a beast, which was why he’d come here in the first place.

Still cursing himself, he edged the door open and peeked around it. The redhead was gone.

Her fragrance lingered. Something deep, seductive, witchy—for lack of a better word—which brought to mind sultry nights, the rustling of black silk, the delight of female musk.

He swallowed, then wrinkled his nose at another smell. The odor burnt matches make.

Slipping into the hall, he closed the door carefully so it wouldn’t make any noise. Not that anyone would notice given the commotion going on in the other rooms. Bangs, snaps, growls and hisses coupled with female voices begging or cooing. Some of those women sounded older than Death. Others spoke lightly, musically.

None of the normal voices was as nice as the redhead’s throaty purr. Her effect on Eric’s cock lingered. The damn thing was on the prowl, getting too thick, trying to crawl out of his snug boxers and go straight to…where? Her?

Ignoring his idiotic desire, Eric strode down the hall and stopped short of the front door, his blood turning to ice.

The young woman who stood between him and freedom looked to be about fourteen and dressed in a schoolgirl’s uniform. Plaid skirt, white blouse, saddle shoes. She crossed her arms over her flat chest and shook her head at him.

A powerful blast of sulfur hit Eric. He made a face at the unpleasant stench.

She scrunched her nose, either smelling what he had or mocking him. The ring in her nostril glinted.

He forced a smile and risked another step toward her. “Excuse me. You’re in my way.”

“You think?” She glowered. “You’re not leaving.”

Eric debated whether he could take her. She was a little thing, but the smoke rising from the ends of her hair and shoulders could be a problem. She might mutate into something worse than whatever kept hitting the walls in this place. Even the pictures up here bounced slightly.

He tried to reason. “I have another appointment. I’m expected.”

His lie didn’t faze her in the least.

“Seriously,” he insisted, squaring his shoulders, trying to look even bigger than he was and far crazier than her. “If I don’t show up—”

“You can leave. We have no intention of keeping you here.”

He turned at that husky, sexier-than-sin promise.

The redhead leaned against the wall, her attention darting from his boxers—haphazardly crammed into his pocket—to what she could see of his naked chest. There, she lingered, running her maroon-polished nail over her belly button.

Eric’s face went slack. He imagined licking that sweet depression, touching the silver butterfly dangling from it, then moving lower. To the pleasure beneath her harem pants. 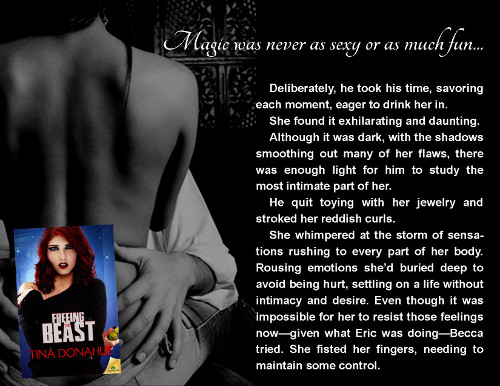 I’m an award-winning, bestselling novelist in erotic, paranormal, contemporary and historical romance for Samhain Publishing, Ellora’s Cave, Siren Publishing, Booktrope, and Kensington. Yay! Booklist, Publisher’s Weekly, Romantic Times and numerous online sites have praised my work, and trust me, I’m forever grateful for that. I’ve had my books reach finals in the EPIC competition, one title was named Book of the Year at a review site, and others have won awards in RWA-sponsored contests. I’m actually featured in the 2012 Novel & Short Story Writer’s Market. Talk about feeling like a freaking star. Before my writing career, I was the editor of an award–winning Midwestern newspaper and worked in Story Direction for a Hollywood production company. Outside of being an admitted and unrepentant chocoholic, I’ve flown a single-engine plane (scary stuff), rewired an old house using an electricity for dummies book, and have been known to moan like Meg Ryan in When Harry Met Sally whenever I’m eating anything Mexican or Italian. Yeah, I like to eat (burp).

I’m offering one winner her (or his) choice of THREE of my backlist ebooks from this list: 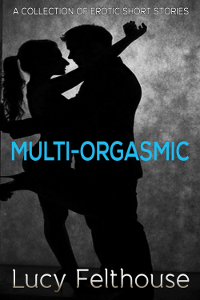 It’s only available on Amazon currently, which means that it is FREE for Kindle Unlimited members, or you can own it forever for a bargain price.

Add to your Goodreads shelves: https://www.goodreads.com/book/show/23457636-multi-orgasmic