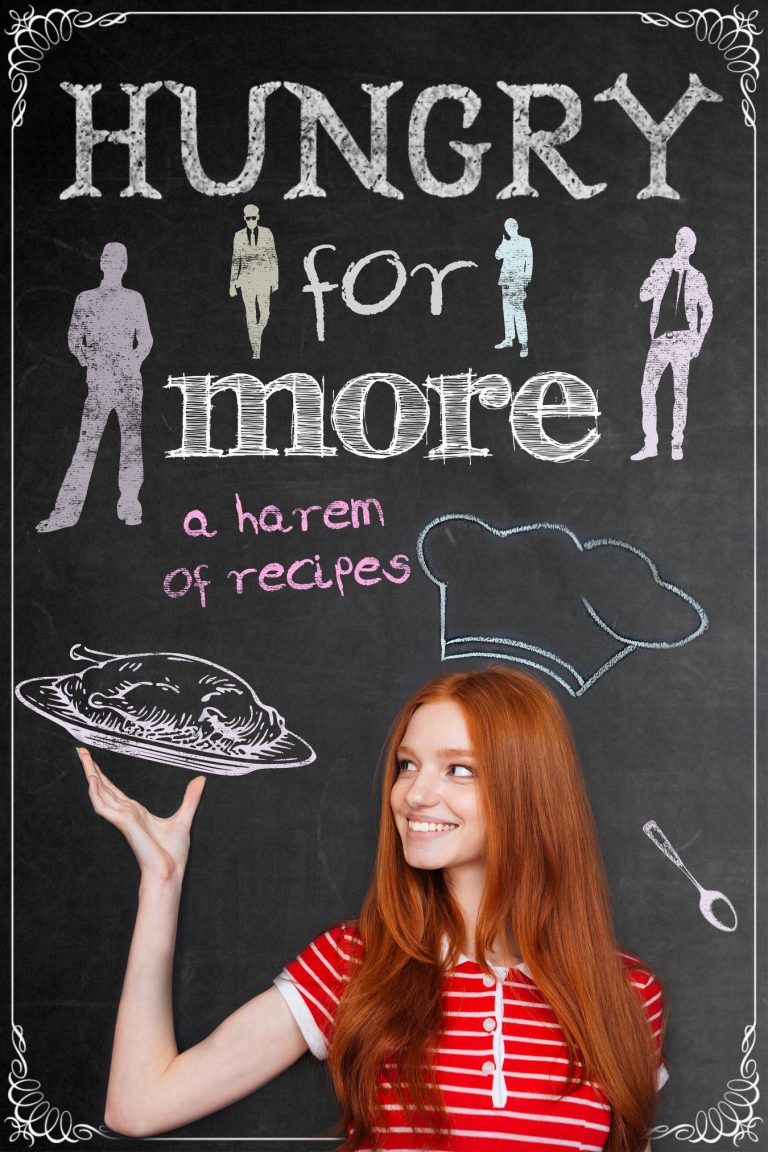 I’m just giving another shout out to this amazing charity cookbook, since it’s been a while. Hungry for More features fabulous recipes linked to all your favourite reverse harem reads.

So if you want to cook, help a hunger-related charity AND learn about some fabulous reads, now’s your chance:

Are you longing to know how to make the delicious food you read about?

Look no further! Grab your whisk, put on your apron, and tell your harem to get chopping. From spicy to sweet, you’ll find a recipe for every occasion in this droolworthy cookbook brought to you by 21 bestselling reverse harem authors.

Get ready to try out 60+ recipes featured in some of your favourite reverse harem stories. All proceeds go to charity!

Check it out in print and eBook format here: http://books2read.com/RHcookbook 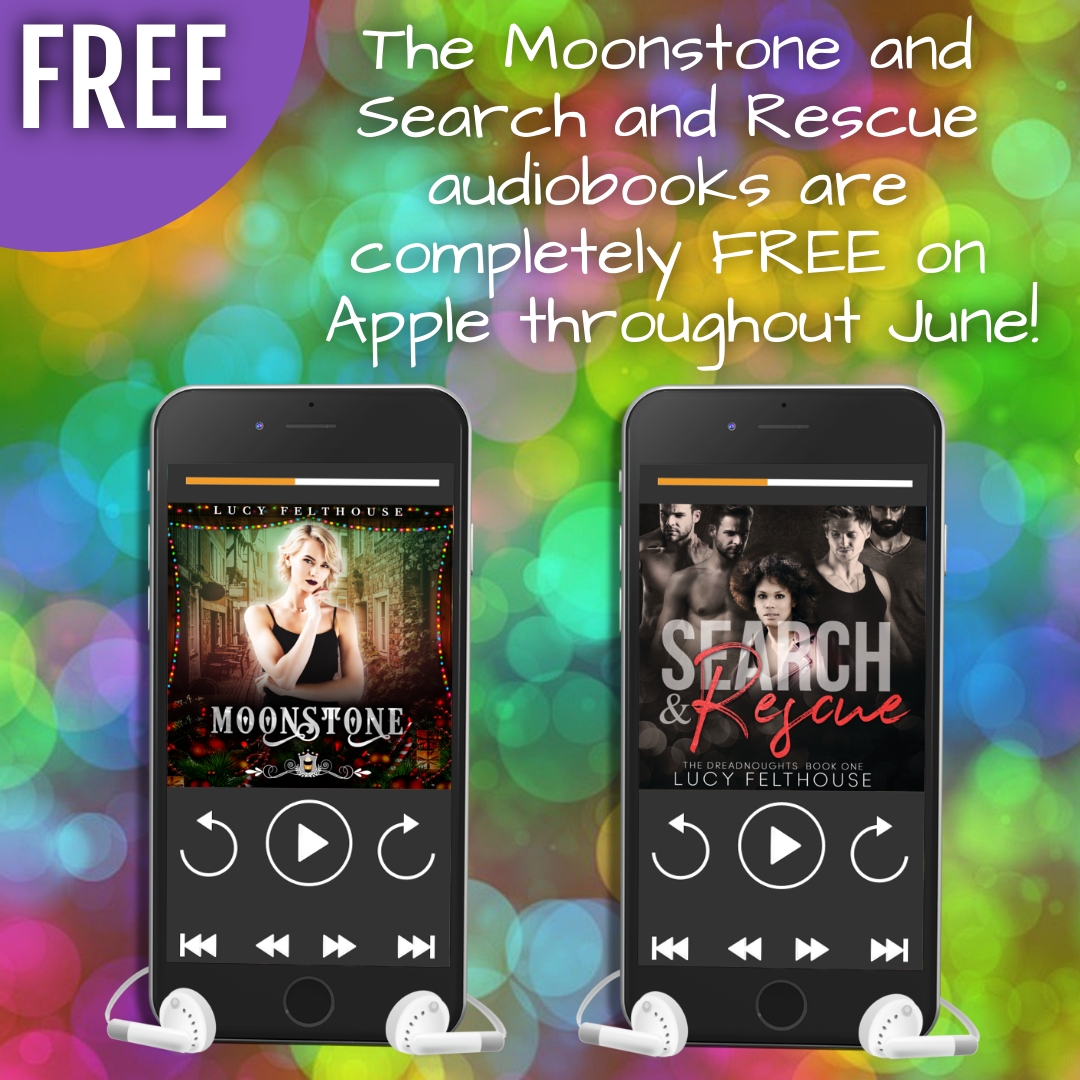 How flipping exciting is this?! As part of audiobook month, Apple have included two of my audiobooks in their free promotion! So if you listen to your audiobooks via Apple Books, then download your freebies today!

Search and Rescue on Apple Books

I hope you have a wonderful Easter weekend planned. A half day’s work for me today (Friday), followed by a cheeky lunch date with my other half, then I’m not back in the office until Tuesday. Awesome – and the weather is supposed to be good, too.

Anyway, I’m here to let you know about this fabulous Bookfunnel promo. For those of you who love reverse harem, and have Kindle Unlimited, this is for you! Just click the banner below to check out a bunch of awesome reads you can get as part of your subscription – including my completed series, The Dreadnoughts. 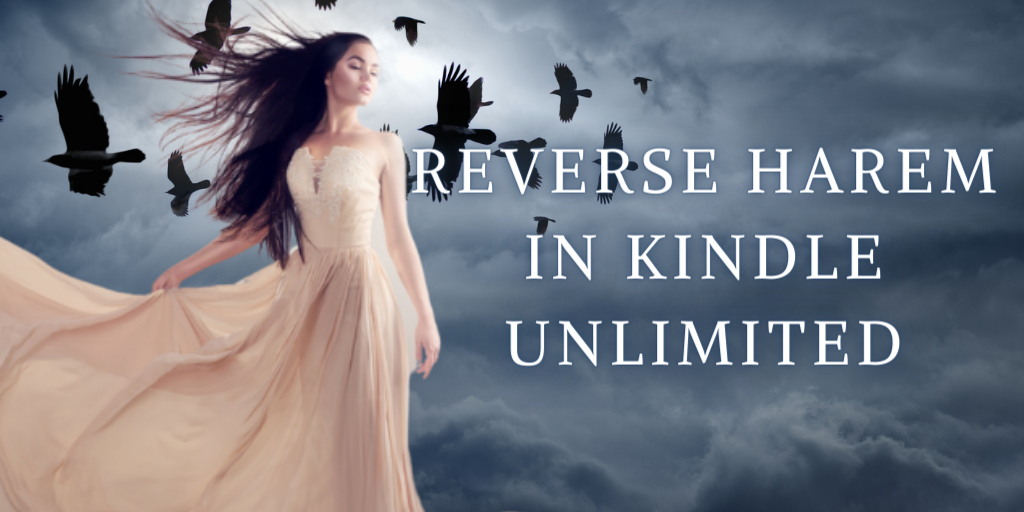 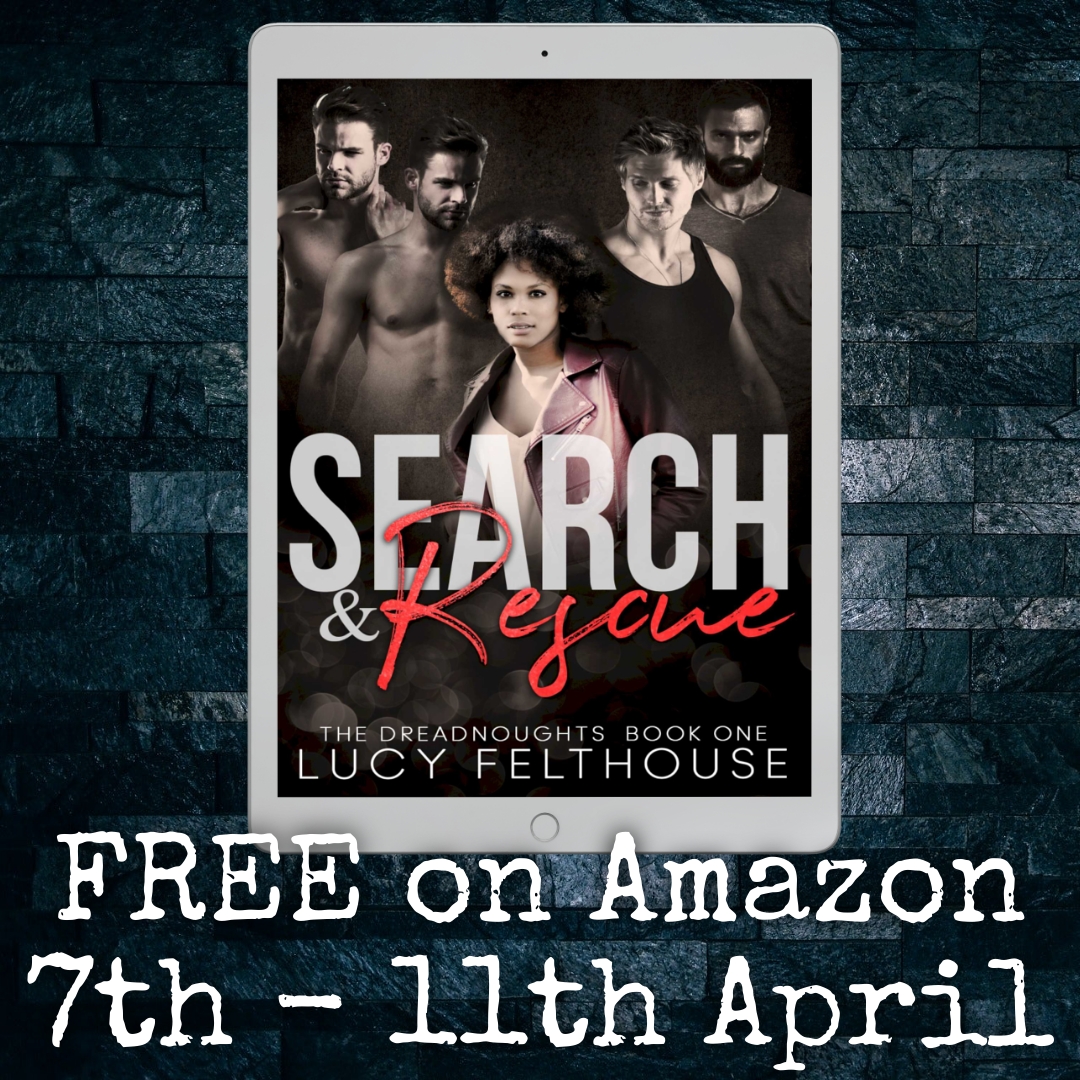 To celebrate the long-awaited release of Safe and Sound, which completes The Dreadnoughts series, I thought it’d be a great time to make Search and Rescue absolutely FREE for a few days, so you can all get a taster of the series and hopefully go on to read the whole thing.

So from 7th – 11th April, you can get the book absolutely free on Kindle: http://books2read.com/searchandrescue

Please grab your copy, tell all your friends, and, when you’ve read it, pretty please leave me a review. I can’t emphasise enough how much reviews help authors. 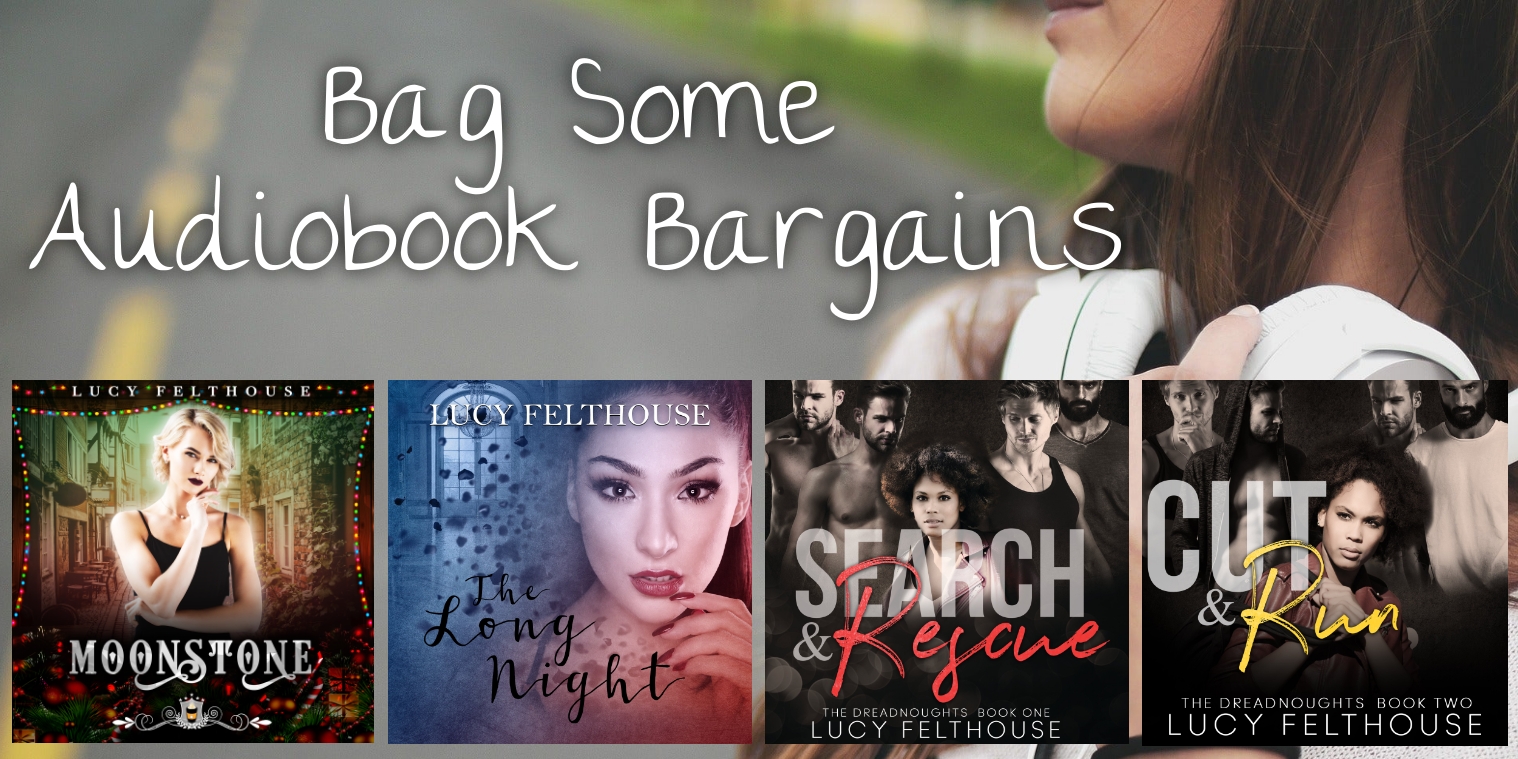 For those of you who like to listen to audiobooks, I have some excellent news. For a limited time, several of my audiobooks are discounted at various retailers. The discounts may vary or end at any time, so I’m just going to drop the links and advise you to double check for yourself before purchasing.

Please do share these amazing deals with your audiobook-listening buddies! Audiobooks are expensive and time-consuming to produce, so the more I sell, the more likely it is I’ll be able to produce more in the future. It helps my wonderful, hard-working narrators, too. 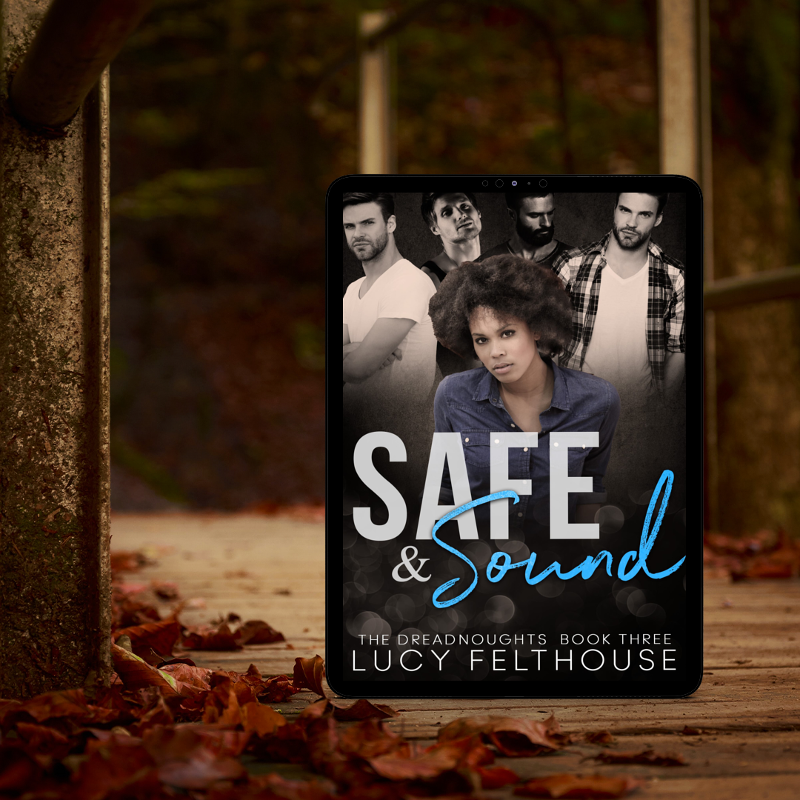 I’m absolutely delighted to announce the release of Safe and Sound, the third and final book in The Dreadnoughts series! It is available to buy on Amazon and to read in Kindle Unlimited. However, it will be in KU for one term only, at which point all three books in the series will be removed from the programme, so please make sure if you’re a KU reader that you add these to your shelves sooner rather than later – I don’t want you to miss out. The paperback is due soon, and audio will hopefully be available in the coming months.

Kim is within touching distance of her goal – but is it already too late?

Kim Medhurst, ex-British military intelligence officer turned scientist and climate activist, is in a race against time. With help from her four men, she’s researching how to make the ygrene – the mysterious power source she retrieved from a remote Scottish island – a viable alternative to fossil fuel. An unexpected visitor recently bought them a little extra breathing space, but they’re painfully aware it won’t last forever.

Despite their hard work, the whole thing looks set to crash down around their ears when the greedy megalomaniac they’ve been desperate to avoid shows up on the Greig twins’ doorstep. While Kim and the gang would happily lay down their lives to stop the ygrene getting into the wrong hands, Kim would prefer to steer clear of violence. Their latest visitor claims he only wants to talk, but he’s brought goons carrying hardware, and Kim wouldn’t be Kim without a backup plan.

Will good prevail against evil, or have all the gang’s efforts and sacrifices been for nothing?