Mid Week Tease: “I didn’t have a clue.” #MWTease

Greg looked down at his legs with a wry expression, then back up at Lucas. “Believe it or not, I broke my back in a skiing accident. Fucking ridiculous, huh? We’ve battled arseholes and terrorists together in the desert and managed to stay in one piece, but put me on a snowy hill and this is what happens.”

Shaking his head, Lucas said, “I’m really sorry, mate. I don’t mean to stand here gawping, but I just can’t get my head around it. I didn’t have a clue.”

“Why would you?” His gaze shifted briefly to the woman, then back. “You left the army; we lost touch. I left the army and took a little bit of time out, and this was my reward. Seems I would have been safer dodging IEDs and suicide bombers.”

Lucas recognized the sarcastic humor his old friend was employing, but he couldn’t bring a smile to his lips—his whirling brain wouldn’t allow it. How was it possible that his old comrade, his friend, a fantastic soldier, had been paralyzed in the pursuit of leisure? It just didn’t compute.

My Sexy Saturday #62 – Sexy Me Up #MySexySaturday

“Like what, Greg? You’re still you. You just sit on your arse all of the time.” He winked. “Seriously, though, even if you never walk again, I’ll still want you. It doesn’t make the slightest bit of difference to me. But I know you. You will walk again. I don’t know when, but I’ll be here when you do. If that’s what you want.”

Nodding profusely, Greg wheeled himself closer. “Yes. Yes. But … that’s not all I want.”

Lucas raised his eyebrows in a question. “It isn’t?”

“No.” A wicked grin spread across Greg’s face. “You know how I said you looked hot in that uniform? Well, I meant it. But I’d also rather like to see what you look stripping out of it. And fucking me. Christ, we’ve experienced enough sexual tension to last several lifetimes. I think we should give in to it, so we can move on with slightly clearer heads.” He tipped Lucas a wink. “I say slightly because, well, we’ve got a lot of time to make up for. I don’t think once is going to be enough. Do you?”

Get your copy of Uniform Fetish: Manlove Edition here: https://lucyfelthouse.co.uk/published-works/uniform-fetish-manlove-edition/

A strangled sound came from behind him, and the woman stepped around and stood between Lucas and the man in the wheelchair, her face the very epitome of fury. “What the hell is wrong with you? You can’t speak to people like that! How rude, how disgusting—I’m calling your boss, right now!” Shooting Lucas a venom-filled glance, she stepped over to a side table holding a landline phone and picked up the receiver.

“Hey, hey,” said the man in the wheelchair, maneuvering himself over and taking the woman’s wrist. “It’s okay. It’s okay.”

“No, it’s damn well not!” she fumed, glaring at Lucas once more. “He can’t go around speaking to people like that.”

“Seriously, it’s okay. I know him. Now put the bloody phone down.”

Lucas watched the exchange in utter confusion, and remained silent. What his brain was telling him and what his eyes were telling him were two completely different things.

Once the other man was happy there would be no phone call taking place, he gave the woman a reassuring pat on the arm and wheeled himself over to Lucas. Holding out his hand, he said, “Good to see you again, Lucas. It’s been a while.”

Still in a daze, he took the hand and shook it, but it was several long seconds before he managed to formulate a reply. “You, too, Greg. But seriously … what happened?”

My Sexy Saturday #61 – Sexy Me Once #MySexySaturday

A silence, companionable this time, fell over them as they sipped at their drinks. When he’d finished the sweet beverage, Lucas reached over and placed his empty mug on a coaster on the table beside him.

“So,” he said, looking at his friend, “what happens now?”

Greg glanced down at his mug, then back up at Lucas almost shyly. “Well, um, I guess it depends.”

“You. This, us meeting, talking, has happened way sooner than I’d planned, but it doesn’t change the way I feel. But if you’re not available…”

“I am.” Lucas replied quickly. He saw no sense in stringing it out. They’d wasted enough time. “I’m available, Greg. I always have been. It’s the soppiest, girliest cliché ever, so don’t you dare breathe a word to anyone else, but it’s always been you, for me. I’m not saying I’ve been the Virgin Mary, but it’s only been physical—nothing more. So, if you want to give it a go, I’m game.”

Greg downed the rest of his tea and dumped the mug and try on the nearest table. “It doesn’t bother you that I’m … like this? That I could be like this forever?”

Get your copy of Uniform Fetish: Manlove Edition here: https://lucyfelthouse.co.uk/published-works/uniform-fetish-manlove-edition/ 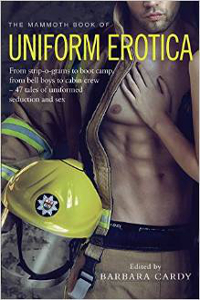 Here’s the skinny on the antho, which is available in both eBook and print format:

Outrageous, even shocking confessions of uniform fantasies and amazing sexual adventures, from what happens when an English Rose is cuffed in the backwoods of Georgie by a Texas Highway Patrol trooper to a waitress at a wedding reception rescued from a night of boredom in an ill-fitting uniform by members of a rugby club. As well as uniforms, the stories involve every kind of kink imaginable, and then some: from straightforward spanking to domination and submission, from solo experiences to group games, and from guilty secrets to sex in public places.

Svetlana joined the army to help her fellow men and women, but exactly how becomes clear to the sergeant when he finds out about her escapades.

Charlene tries out as a strip-o-gram nun, but makes so many mistakes that she ends up bent over the boss’s knee.

Alan loved to admire the cute little uniforms of waitresses in old-fashioned tea rooms, then one day the phrase ‘at your service’ takes on a new and more exciting meaning.

A young tourist likes the look of an uptight Life Guard – she helps him to let go a little with a public blow job.

Buff Darren has had limited sexual experience until he becomes the manager of an Italian restaurant . . . and the waitresses lock him in as he’s shutting up.

Want to get your hands on this hot little number? (Actually, it’s not little. It’s a whopping big book!) Go here.

Mid Week Tease: “Christ! What in God’s name happened to you?” #MWTease

Welcome back to Mid Week Tease! This week, I’m sharing something different. This snippet is from my story, Fired Up, which appears in the just-released anthology, Uniform Fetish: Manlove Edition, which has already hit bestseller lists on Amazon, All Romance eBooks and BookStrand!

Lucas Hartley grabbed his helmet and equipment and jumped out of the fire truck. The helmet wasn’t a requirement to go fit smoke detectors, but if the house had kids, it was pretty much a necessity. He’d yet to come across a rug-rat who didn’t ask Lucas to put his fireman’s helmet on, then take it off so they could try it on. He quite liked kids, so it was nice to see their little grinning faces, to make their day. Plus, if they were a handful, he could use the helmet as bribery to make them behave while he fitted the detectors and ran through a comprehensive fire safety discussion with a responsible adult. It never failed.

The downside, however, was that the whole fireman-in-uniform thing often got the responsible adults of the female persuasion all hot under the collar. For most guys, this wouldn’t be a problem. After all, a little flirtation here and there was good for the ego. But for Lucas, it was a drag—why couldn’t there be a single dad somewhere who was gay and needed a smoke detector fitting? Sadly, it just never seemed to work out that way.

Sighing, Lucas slammed the door on the mocking comments of his colleagues, who’d opted to stay in the truck. It only took one person to do the job in question, and today Lucas had drawn the short straw—literally. The others would no doubt chill out, chat and use their phones to text and surf until he was done, or an emergency came in. Whatever was first.

Rolling his eyes, he let out another heavy breath, then rearranged his face into a smile. No point taking his grumpiness out on the home owner. Striding up to the door, he put his equipment down, then grasped the knocker and gave it a firm tap against the wood. After a short pause, he heard the unmistakable sound of a key turning in a lock, and the door was opened a little. A woman’s face appeared in the gap. She looked him up and down, then peered around him to the large red truck parked at the end of her driveway.

Apparently satisfied he wasn’t a cold caller, she opened the door wider. “Hello,” she said, smiling. “Come on in.”

“Thanks.” Lucas picked up his gear and moved into the hallway, waiting while the woman shut the door.

After doing so, she indicated he should head through an open doorway into the living room. Lucas entered the room, and was just about to ask the woman—Mrs. Judd, according to his paperwork—if she knew where she wanted the detectors fitting, when a man in a wheelchair appeared from another open doorway.

Opening his mouth to greet the man, Lucas then snapped it shut as his brain struggled to process what he was seeing. Trying again, he came out with, “Christ! What in God’s name happened to you?”