If you’re a fan of winter/festive-themed romances, then you should check out this amazing Winter Magic Book Fair, organised by Dariel Raye.

Click the banners below to check out the latest Bookfunnel promotions – perfect for fans of scorching hot erotica and festive romances:

Blissemas Snogs in the Snow

Welcome to Blissemas Snogs in the Snow! This is where a bunch of awesome writerly folks are sharing festive snogs from their stories to get you in the holiday mood (and hopefully a sexy mood, too! 😉 ) – so please check out my snog, then scroll down and enter the giveaway, then hop back on over to the main site and check out all the other snogs! Have fun!

“I will definitely recommend Budapest to people. I must confess, I am only here because I got a good deal, but now my eyes have been well and truly opened. If people are only visiting western European cities, they are seriously missing out. Mind you, they won’t all have such a wonderful tour guide, will they?”

“No,” he replied, slowing the car and pulling over at the side of the road, “they won’t.” Engaging the handbrake and taking the car out of gear, he turned to her with a cheeky grin. “You are very lucky. I don’t take just any girls out for sightseeing trips at midnight.”

Midnight? Shit, he was right, too. A glance at the clock on the car’s dashboard showed it was 23:58. “Wow! I didn’t realise it was that late! Well, they say time flies when you’re having fun.”

Emil nodded, and edged a little closer. “Yes, I think so. And does time also fly when you have the best tour guide on the planet?”

“You’re just fishing for compliments now, Emil,” she shot back with a smile.

“Maybe. Okay, I will settle for a kiss instead, then, if you will let me.”

Let him? Bloody hell, she’d been hoping for a kiss for a good couple of hours, at least. Trying to keep her cool, she bobbed her head up and down. “Yes, Emil, I will let you. I would like it very much, in fact.”

He responded by unclipping his seatbelt, followed by hers. Then, shuffling as close as the centre console would allow, he reached out and slipped his hand gently behind her neck. They’d both removed their hats, scarves and gloves once they got in the car, but his hand was still warm on her skin, sending further heat zinging through her veins.

His lips were soft and warm, the kiss itself gentle, yet supremely sexy. Emil used just the right amount of tongue—nothing too forceful, or too wet, yet he explored her mouth with a skill and sensuality that made her head spin. His other hand toyed with her hair, sending delicious shivers skittering up and down her spine.

For several long moments, they were lost in each other—their tongues twisting, battling, dancing. Then, before things got too heated, Hermione gently disentangled with a whoosh of breath.

“Phew!” She giggled, and fanned herself exaggeratedly. “That was some kiss, Emil. Look!” She pointed at the windscreen. “We’ve even managed to steam up the windows.”

Even in the dim light cast from streetlamps some metres away, she could see the lust etched onto Emil’s face, and a thrill rushed through her. She felt just the same, felt as though she could clamber right into the backseat of the car and get naked, but she had no intention of doing so. Not when there was a perfectly nice hotel just a few minutes’ car ride away, and the lack of risk of getting caught.

Seeming to shake off his arousal, or at least dampen it down, Emil looked at the windscreen, and laughed. “Yes,” he switched on the ignition and then the heaters, “we have. I had better get rid of that before people think we are up to naughty things in here.”

The tone of his voice told her that he was just as eager to do those “naughty things” as she was, and she had a feeling that she wouldn’t be returning to her hotel room alone that night.

Want to read the rest of the story? Buy links are here.

And now for my giveaway:

Now, head back on over to Blissemas to continue checking out the other posts!

Brought to you by Spanking Romance Reviews & The Saturday Spankings Blog!

Thank you for joining us for Winter Spanks! Let’s warm up with some hot bottoms & cool prizes! Read on for a chance to win:

Welcome to the Winter Spanks: Cold Hands, Warm Bottoms blog hop! When I first signed up, I wasn’t quite sure what I was going to write about, because although I’ve written winter-themed stories and spanking stories, I haven’t yet combined the two. I must be honest, I’m really not a fan of the cold weather, not one little bit. I dislike being cold, dislike snow and ice, and am hoping for a lottery win so I can buy a house in Australia and live there for several months of the year! Knowing this, it’s probably no surprise to you that one of my favourite books that contains spanking is actually set in California in the summer. I’m sure you’ll forgive me for the lack of cold hands when you  meet Travis Connolly – a character in Grand Slam, a BDSM novel co-authored by myself and Lily Harlem. Here’s a spanking snippet.

I’d tip her off another time. Right now I was going to turn that beautiful arse bright red, and then who knew what would happen afterward? Something good, I hoped.

I looked around the room, giving myself a few seconds to get into the right frame of mind for what I was about do. Everyone else was immersed in their own activities, no one had even appeared to notice us enter. Perfect.

I stroked the dip of her back. This was supposed to be a punishment, but on the other hand, Marie was a total newbie and I didn’t want to scare her off to the extent that she’d pull out of our sexual arrangement.

So, now you’ve enjoyed some of Travis and Marie’s sexy adventures, onto the prizes. In keeping with the winter theme, I’m giving away a copy of my shifter story, Reindeer Games: Cupid, which is actually set at this time of year. So there’s cold and ice… but no spanking! Damn, I really need to write a winter spanking story, don’t I? 😉 *adds to list*

Follow the links to read the blogs–comment on the blog to prove you were there. At this blog, please answer the question – what’s your favourite thing about winter?

COPY AND PASTE COMMENTS WILL BE DISQUALIFIED! Each comment earns you one entry for the grand prize. You must provide your email address for your entry to count. Use the Rafflecopter for a chance to win Reindeer Games: Cupid. Enjoy all the free stories, posts, & fun!

Keeping Nice and Toasty This Blissemas 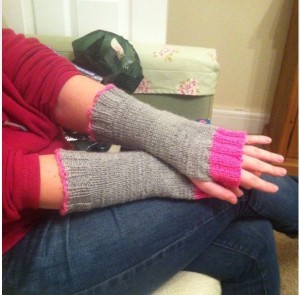 If you’ve stopped by this site before, particularly last Blissemas, you’ll know I’m not a fan of winter. I don’t like the cold, I don’t like snow and ice, and I can’t stand the shorter days and dark nights. Brr. However, this year I’ve picked up a new hobby that will help me counteract the cold part – knitting! I used to knit when I was younger, but then I stopped and forgot how to do it. I was recently re-taught and I became hooked. So far I’ve knitted teddies for charity, an iPhone case, a Kindle Fire case and some wrist warmers – which are great for when I’m working on the laptop because I can still use the mouse and keyboard easily, but I’m kept nice and toasty. What do you think?

I’m now working on a Christmas Elf which is a little more difficult than anything I’ve attempted so far, but fingers crossed I’ll achieve it. Then I’m making a cardigan, also to keep me nice and warm. It’ll be a big project, but hey, the winter in this country lasts until March/April time so once it’s done I’ll definitely get some wear out of it 😉 I will defeat you, winter, I will!

As well as being jam-packed full of Christmassy and seasonal goodness, Blissemas is also offering some fantastic prizes. I, personally, am giving away a $5 Amazon Gift Card to a randomly chosen winner. Just complete the Rafflecopter below to be in with a chance of winning.

And the grand prize for Blissemas overall is either the eReader of your choice (pick from either a Kindle, Nook, Kobo or Sony) or a $100 Gift Card (choose either All Romance, Amazon, Totally Bound or Barnes & Noble). All you have to do is leave a comment on this post to be entered into the draw. Make sure to pop back to Blissemas.co.uk each day and visit that day’s author – there will be more individual prizes to be won, and each comment you leave will get you another entry into that fantastic prize draw. Good luck!