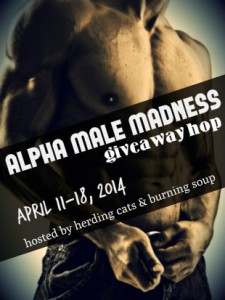 Alpha Males. You know you love em. And so do we! We’re celebrating them and all their delicious alpha male glory for an entire week with giveaways at every single blog. Stop by and check out which males are making us pant with all that sexy swagger they have going on.

What can I say? I had to sign up for this hop because I’m a sucker for an alpha male. I even wrote a couple 😉 There are two in particular that I still think about, despite having penned them quite a while ago, but because they feature in my first novel, they’ll always have a special place in my heart. Take a bow, Jeremy Davenport and Ethan Hayes from Stately Pleasures…

Here’s a snippet of them being all yummy.

She attempted to nod, then realised that was impossible with her forehead pressed against the top of the dresser. Jeremy hadn’t given her permission to move either, so she simply murmured, ‘Yes, please.’

‘Polite, isn’t she?’ Jeremy said, obviously aiming his words at Ethan. ‘What a fast learner she is. Knows she needs to wait for permission.’

‘She sure is,’ the other man said. ‘And responsive too. I mean, look at how wet she is. She’d never say so, but I bet inside she’s absolutely screaming for you to let her come. Or to fuck her. I’m sure she’d be agreeable to either option.’

Jeremy laughed. ‘You’re right. If I didn’t know better, I’d say she was a bit of a slut.’

Alice stopped herself letting out an indignant retort. She knew that’s what he wanted – an excuse to tease her more, to punish her. He knew damn well she was no slut. Or did he? She had, after all, had sex with Ethan on a kitchen counter after knowing him for all of a couple of days. And they hadn’t even been on a date. It hardly counted though, did it? Based on the things on that damn list, even if she hadn’t had an impromptu fuck with the head of security, she’d have ended up having sex with him very soon, anyway. So what did it matter?

It didn’t, she decided. Jeremy was just trying to get a rise out of her. And he was going to be severely disappointed. She was no sexual deviant, like the two of them, but she was tougher than she looked, and she’d put up with anything and everything they threw at her. Rather than lying back and thinking of England, she’d lie back – or kneel, or stand, or crouch doggy-style – and think of her career. All she needed to do was weather this smut storm and she’d be made for life.

You can grab your copy of Stately Pleasures here: https://lucyfelthouse.co.uk/published-works/stately-pleasures/

Now check out my giveaway and the hop’s grand prize giveaway, before checking out the rest of the blogs on the hop.