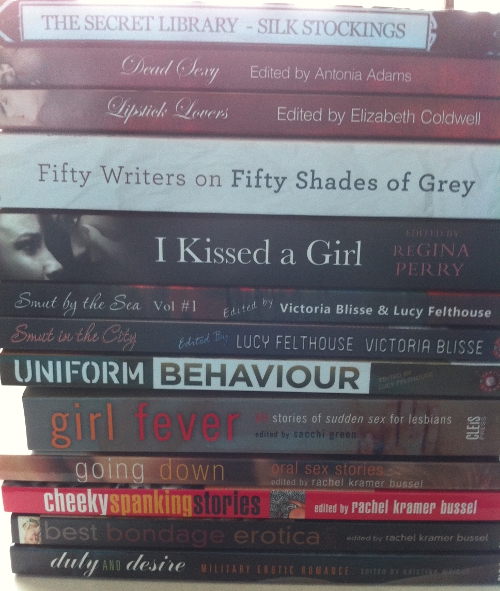 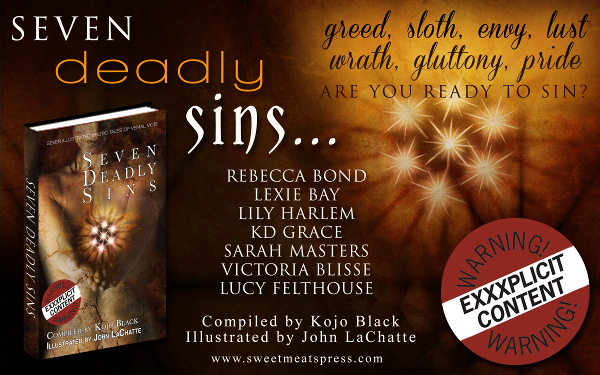 Are you ready to sin? I certainly hope so, because the Seven Deadly Sins anthology is here! Dreamt up way back in March, as myself, Lily Harlem, Victoria Blisse and K D Grace sat around a hotel bar table late at night, this book has been a long time coming. Once the idea was conceived, there was no ignoring it. The four of us immediately jumped at the idea, then as we all got back to work the following week it became very real. We pulled in three other author buddies and took one sin each. I’d already snapped up Pride, and as Lily Harlem suggested I make mine a lesbian piece, I did just that.

My story is called The Sweetest Revenge (which is also available as a standalone story), and here’s a bit more about it:

Abigail’s had a crush on Mackenzie the motorcycle courier for months, but Mackenzie doesn’t even know she exists. Nothing exists for Mackenzie, though, except for her pride and joy – her Ducati Monster.

After an unpleasant encounter, Abigail decides to get her own back on Mackenzie – in the worst possible way. Despite the pleas of her colleagues, Abigail plans to hide Mackenzie’s precious motorbike, and take the haughty bitch down a peg or two. 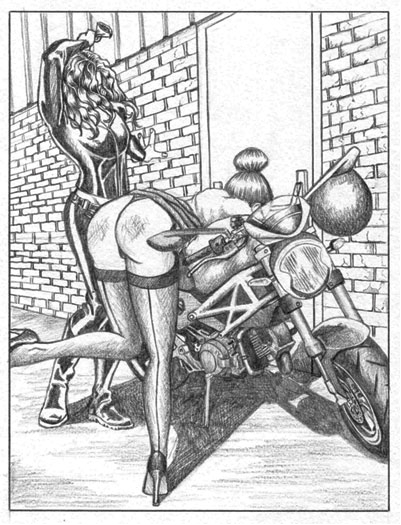 The way Mackenzie’s breathing had increased hinted to Abigail that the other woman wasn’t unaffected by their proximity, but she wasn’t quite as weak-kneed. “Well, how about we wipe the slate clean, and start again?”

“Okay, that sounds great to me.”

“Yes, for wiping the slate clean. It doesn’t happen just like that”—she clicked her fingers—”with me, you know. I like to make things a little more fun.”

The look on Mackenzie’s face seemed to indicate that her fun wasn’t of the sweet and innocent kind. Suddenly, she pulled away from Abigail and walked back towards her bike. She reached into the helmet which was still hanging from one of the handlebars and pulled out her gloves. Flicking them back and forth in her hand, she said, “So, you up for some fun?” Then, just in case Abigail had had any doubts as to what she was talking about, she thwacked the gloves against her palm, and grinned widely at the older woman.

Abigail opened her mouth but couldn’t seem to make any sound come out. Did she seriously mean…? Here?

“Well?” Mackenzie indicated the seat of her bike. “I’ll be gentle. It’s clearly your first time.”

Abigail was still too stunned to correct her. She had, in fact, been spanked before. A few times. And she’d enjoyed it. But it had been nothing too heavy, and certainly not with leather gloves. And absolutely, one hundred per cent not bent over a motorcycle in a public place!

“Come on,” the redhead said, waving the gloves once more. “No one will see. That door is shut, and nobody is going to come wandering around the side of the building any time soon, are they? That’s why you hid my bike here in the first place, wasn’t it? Go on,” she wheedled, “just six of the best, and all will be forgiven.”

Abigail finally found her voice. “And what do I get to do to you in return?”

Mackenzie wiggled her eyebrows and grinned wickedly. “Anything you like.”

“Yep. I’m a pretty adventurous kind of a girl.”

Intrigued? You should be. My story nestles in this super hot anthology alongside tawdry tales from K D Grace, Lily Harlem, Victoria Blisse, Lexie Bay, Rebecca Bond and Sarah Masters. But watch out, your fingers might get scorched! 😉 You can also grab my standalone story here: The Sweetest Revenge.

I’ve had to cheat a tad this week. Luckily, Victoria Blisse has always said any kind of lips are acceptable. Therefore, below I’ve posted some seriously hot sentences below with the “other” kind of kissing. The excerpt is taken from my lesbian story, The Sweetest Revenge, which appears in the Seven Deadly Sins anthology, due to be published on the 30th November by Sweetmeats Press. I’m delighted to be snuggling between the covers of this super hot illustrated anthology with K D Grace, Rebecca Bond, Lily Harlem, Lexie Bay and Sarah Masters. We’ve all taken a “sin” and made it our own… enjoy!

Using her fingers to pull apart Mackenzie’s pussy lips, Abigail went to town on eating her out. She licked up all of the juices from the redhead’s vulva, deliberately avoiding her clit, then thrust her tongue inside her wet hole. Mackenzie moaned and writhed on the bed—though as her movement was restricted, she could do nothing about the fact her lover intended to tease her for as long as possible, before being allowed to come.

Abigail also moaned—the taste of Mackenzie’s cunt was delicious and she felt as though she was in heaven. She wanted nothing more than to make the younger girl come—which she knew would take a matter of minutes if she touched her clit—but was determined to hold back until Mackenzie was at absolutely fever pitch—and begging for it.

Sliding her tongue up, she felt Mackenzie tense beneath her. She held back a laugh. The other girl obviously thought she was going to lick her clit. No such luck. She simply flicked her tongue from side to side mere millimetres below the swollen bud of flesh, before moving back down. Only this time she didn’t stop when she got to Mackenzie’s entrance. She went lower, pushing open the redhead’s luscious ass cheeks and slipping her tongue between them and to the crinkled hole of her anus.

A yelp came from the head of the bed, and Abigail’s own arousal soared as Mackenzie’s breathing grew faster, and more juices gushed from her pussy, down her perineum and onto her waiting tongue. She pushed it deeper into the tight hole, thrusting and fucking and growing more frantic as she resisted the temptation to suck Mackenzie’s clit into her mouth and stimulate it until she climaxed.