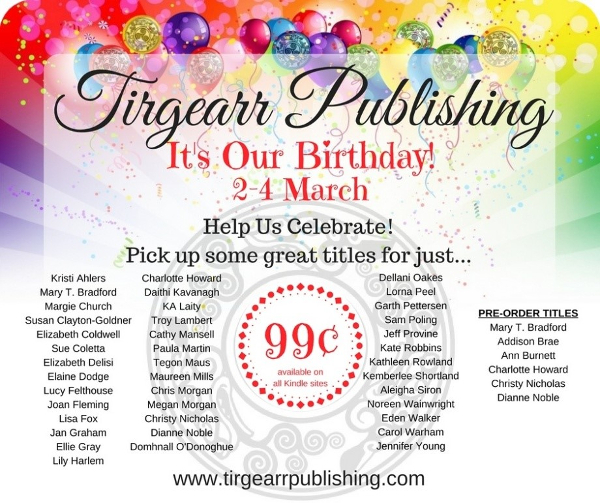 It’s Tirgearr Publishing’s birthday, and they’re celebrating in style, with an online radio show, an amazing giveaway, and a ton of books available on Kindle for just 99c – what could be better? Visit tirgearrpublishing.com to check out all the pertinent details, and on their site the author names in the graphic above take you direct to their book that’s on sale.

My book in the sale is One Night in Budapest. Here’s a cheeky link that takes you right there: http://mybook.to/ONiBudapest 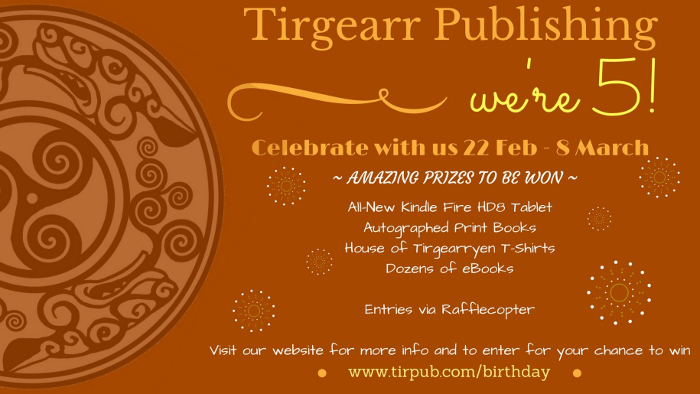 It’s one of my publishers’ birthday, but they’re giving the presents!

Join Tirgearr Publishing from 22nd February through 8th March to help celebrate their 5th birthday. Grab selected eBooks for 99c (including one of mine – see more info below), win awesome prizes, including a Kindle Fire HD8 tablet, autographed print books, and much, much more.

So, what are you waiting for? Head to www.tirpub.com/birthday to find out more and enter the giveaway. 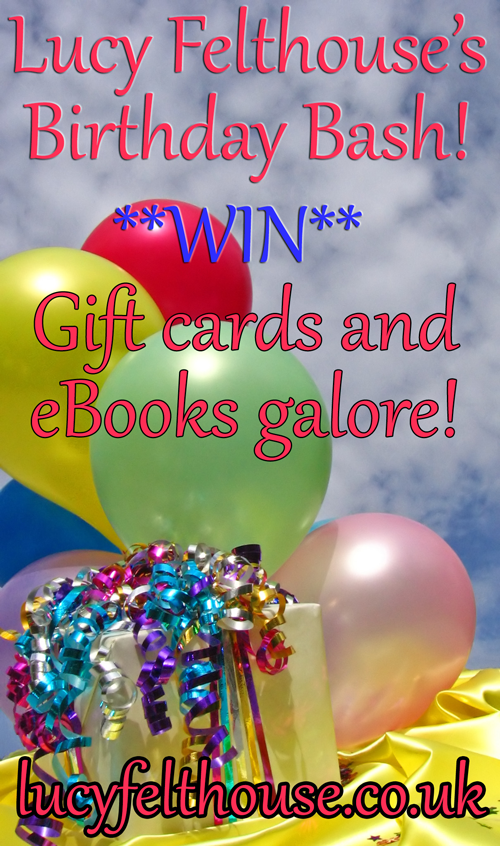 Today I’m celebrating my birthday, whoop, and I wanted to share it with all of you. So… I have some presents for you!

Secondly, there’s a huuuuge giveaway. Myself and some of my friends have put together an amazing prize pack for one lucky winner. There’s a gift card in there, and a whole bunch of eBooks, too! So if you want to be in with a chance of winning this super prize, use the Rafflecopter below to place your entries. The giveaway is also open until the end of the month, so you’ve got lots of time to enter, and you can Tweet the giveaway each day to increase your entries into the pot.

It’s the last day of the birthday celebrations. Awww 🙁 If you missed the previous posts, check them out here, here, here and here. If not, please read on…

Jeremy Davenport is a millionaire, yes. But it’s not mentioned explicitly in the book. In fact, his money is hardly mentioned at all, and isn’t part of the storyline, really, other than the fact he owns a stately home, which he inherited. This is not a book about a rich guy splashing his cash. And there are no helicopters involved.

Thank you so much for playing along, I hope you had fun, and good luck with the giveaway!

The birthday celebrations continue! If you missed the previous posts, check them out here, here and here. If not, please read on…

As I mentioned in one of my previous posts, it took a while for me to make the jump from short stories to novellas, then from novellas to novels. I was worried that I didn’t have enough “story” to warrant a novel, or that it would get boring, or that I’d get bored.

But when the time came for me to start working on Stately Pleasures, I decided there was only one way to find out—I’d have to get on with it. With short stories, I never bother planning as they often just come from a small idea and I then write and see what happens. But this couldn’t be the case with a novel, I could end up meandering through a story, have no actual plot, or something equally horrendous. So, to ensure I wrote a full-length book which had plot, journeys for the characters, continuity and lots of hot sex, a plan was needed.

I know writers work in many different ways when it comes to planning, but I went back to being somewhat old-fashioned. In a brand new notebook (any excuse) I started scribbling. Then I shuffled things around, crossed things out, added things and finally had twenty (I think – I don’t have the notes any more) chapters planned out, with a beginning, a middle and a satisfying (I hope) ending.

Once that was done, I had no excuse. I had to get on with it—and so I did. It was much easier having the plan there, although I knew I wouldn’t stick to it 100%–if things changed it wasn’t an issue. It just meant that once I’d finished a chapter, I could look at the notebook and know exactly where the story was going next. There were no moments of indecision, of wondering what was going to happen next, how the characters were going to get from A to B, and why.

That’s not to say it wasn’t hard work. It was, very much so. I’d been used to being able to write a short story in a couple of days—a very quick and satisfying thing. A novel, of course, takes much longer, so the satisfaction of finishing is much further away. But far from being disheartened by this fact, I let it spur me on. Each word, each chapter I completed was another step closer to the end. And the more I wrote, the more I was determined to get it finished and not see the work I’d already done go to waste.

And, obviously, I got there! I think it took me roughly four months, which I don’t think was too bad considering that included the planning and a little extra research, and that it was my first full-length novel. I also don’t write full-time. I was very proud of my achievement, although I knew it wasn’t the end of the work! More information on Stately Pleasures’ route to publication in the next post.

Be sure to stop by on the 23rd for the fifth and final birthday post!

The birthday celebrations continue! If you missed the previous posts, check them out here and here. If not, please read on…

My Research for Stately Pleasures

Research wasn’t essential to Stately Pleasures. The stately home it’s set in is fictional, and yet I did research. Why? Because I wanted to. I wanted to build a picture in my mind of Davenport Manor, what it looked like inside and outside, what the grounds were like, and so on. Much of what I saw, many of the places I visited, weren’t even used in the book, but it all helped me to figure out what the fictional house was going to be like.

My National Trust membership got some serious abuse while I was researching. Many weekends were spent sneaking off to properties, both nearby and further afield, as well as taking in some places to and from weekends away that were too far away to visit for a day trip.

The picture in my mind grew more detailed as I pieced together what I wanted from various mansions—school rooms, libraries, servants’ quarters, corridors and much more. But still I headed out to do more research. It wasn’t a hardship, you see. I love visiting those places anyway, which is why I ended up writing a book set in a stately home in the first place. Other things I saw sparked off more ideas for scenes to be included in the book—including a pestle and a carpet beater.

Finally, I was all researched out. I just needed to get on and write the book. But one thing I really wanted to include was a maze, and there wasn’t anywhere nearby that had one. One flying visit to a National Trust garden and then Hampton Court Palace later (not in the same day, of course!) and I was all sorted—I had everything I needed.

I take plenty of photographs when I go to these places, whether I’m researching or not, because I never know when places will pop up in my work. I referred back to my photos plenty, as well as heading online. The Internet is an incredibly valuable tool, and I used it to find out or clarify various bits and pieces and make sure certain things that I’d mentioned were correct.

I think perhaps I over-researched certain things as not everything was used in the book, but I don’t mind, not one bit. I’d rather truly know what I’m writing about, even if I don’t mention every little snippet. And it was an incredibly fun experience—though my poor other half possibly won’t agree!

Be sure to stop by on the 19th for the next birthday post!